WHERE CAN I READ IT FOR MYSELF? Columbia University Butler Library 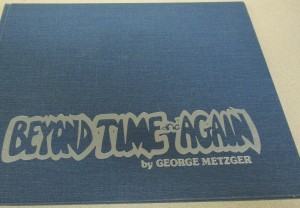 What a beautiful book Metzger’s Beyond Time and Again (1976) is! A 9½ x 7½ blue hardback, in landscape format, with lavish endpapers (see fig. 2). Based on the information in Clay Geerdes’s newsletter Comix World (Sept. 1976) I believe Metzger’s book was originally published with a “color wraparound dust-jacket” (alas, this wasn’t present when I consulted a copy). Its printing was timed for the 1976 San Diego Comics Convention, and copies were rushed there within hours of coming out of the bindery. “Between advance sales and wholesale purchases […] at the convention we had our money back that first day,” one of the publishers, Richard Kyle, later reported in a letter to the magazine Comic Book Artist, but “we’d published the book solely because we believed in it” (13).

Fig. 2. Endpapers of Beyond Time and Again © 1976 George Metzger

The book’s arrival had been anticipated since November 1973: the back cover of that month’s Wonderworld advertised the publication of Metzger’s book, “America’s first graphic novel.” Many of Wonderworld’s readers would have known that the term ‘graphic novel’ was one of Kyle’s, coined in 1964 (along with ‘graphic story’) to denote an intelligent and sophisticated use of the comics medium. Kyle is a key figure in the development of an adult audience for comics. In addition to his contributions to the APA Capa-alpha and Bill Spicer’s Fantasy Illustrated / Graphic Story Magazine, Kyle’s magazine Wonderworld (which began life as Graphic Story World) acted as a forum for comics scholarship and as a catalogue of sorts for the Graphic Story Bookshop which Kyle ran with Fred Patten in Long Beach, CA.(i) In Wonderworld’s first editorial in August 1973 Kyle wrote that this magazine “will help shape” the “destiny” of the graphic story as “the most significant artform of the last quarter of our century” (2). 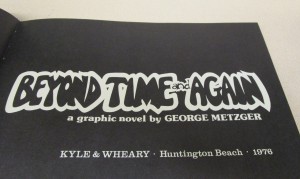 Metzger was highly praised in fan circles during the 1960s and 1970s. The imaginative comics he drew for Fantasy Illustrated / Graphic Story Magazine displayed an impressive command of the mechanics of comics storytelling. In retrospect, they appear to be a harbinger of the experiments of the underground (Schelly 131). A hardcover book containing a long comics narrative by Metzger? No wonder Geerdes called it “George Metzger’s long awaited graphic novel” (the September 1976 newsletter of Comix World).

I know it is hardly ground-breaking to read the protagonist of a narrative as a stand-in for the creator, but the hero of Beyond Time and Again Seth of Comstock (that name itself is full of allusions) is in an analogous position to Metzger. At the start of the book, in a future Earth, the restless Seth sets out on a quest to discover whether the spells of the Ancients still exist. Seth is a magician, left “these few ancient spells and runes” by his “late father,” and he is described as “seeking the Arts of the Past to escape the future…” [10].

Metzger seems to be dramatizing his own position as an innovative comics creator, using the practices of the past but seeking to expand his repertoire of technique. The names of those runes and spells he seeks – “the Rune of Everchange, the incantation of the Slow Hour” – invoke the notion of panel transitions (the sequential art at the heart of one definition of comics) and manipulating time so it appears to slow down. Seth goes questing in order to “inquire” whether the Ancients’ spells “are left in the world today” and Metzger too uses the space of the book as an exploration of formal techniques [10]. When Seth walks through a time distortion spell without problem, another wizard wonders if he has found a man with “some latent ability to move thru time” [24] – surely the very thing Metzger was trying to do with his comic, manipulate space to give the impression of temporal change. As well as panel transitions, Metzger uses De Luca Effects to show Seth moving between the future and the present (see fig. 4). One striking sequence is a silent lovemaking scene [34-35] that I won’t reproduce here, but I wonder whether it’s the sort of thing Metzger had in mind when he described being influenced by “japanese comics for awhile which are very visual, very film-like, & I took to doing more visual stuff, letting the story be told by visual action & dialogue” (qtd. in Geerdes’s Comix World newsletter #30 in 1975).

I find it difficult to believe my interpretation is reading too much into the text; Seth’s return to the ‘present’ is described as “dropping back into the past sequences of the continuum…” [45]. Again and again, there seems to be congruence between Metzger the creator and Seth the character, both learning how to master the rules of time in comics. 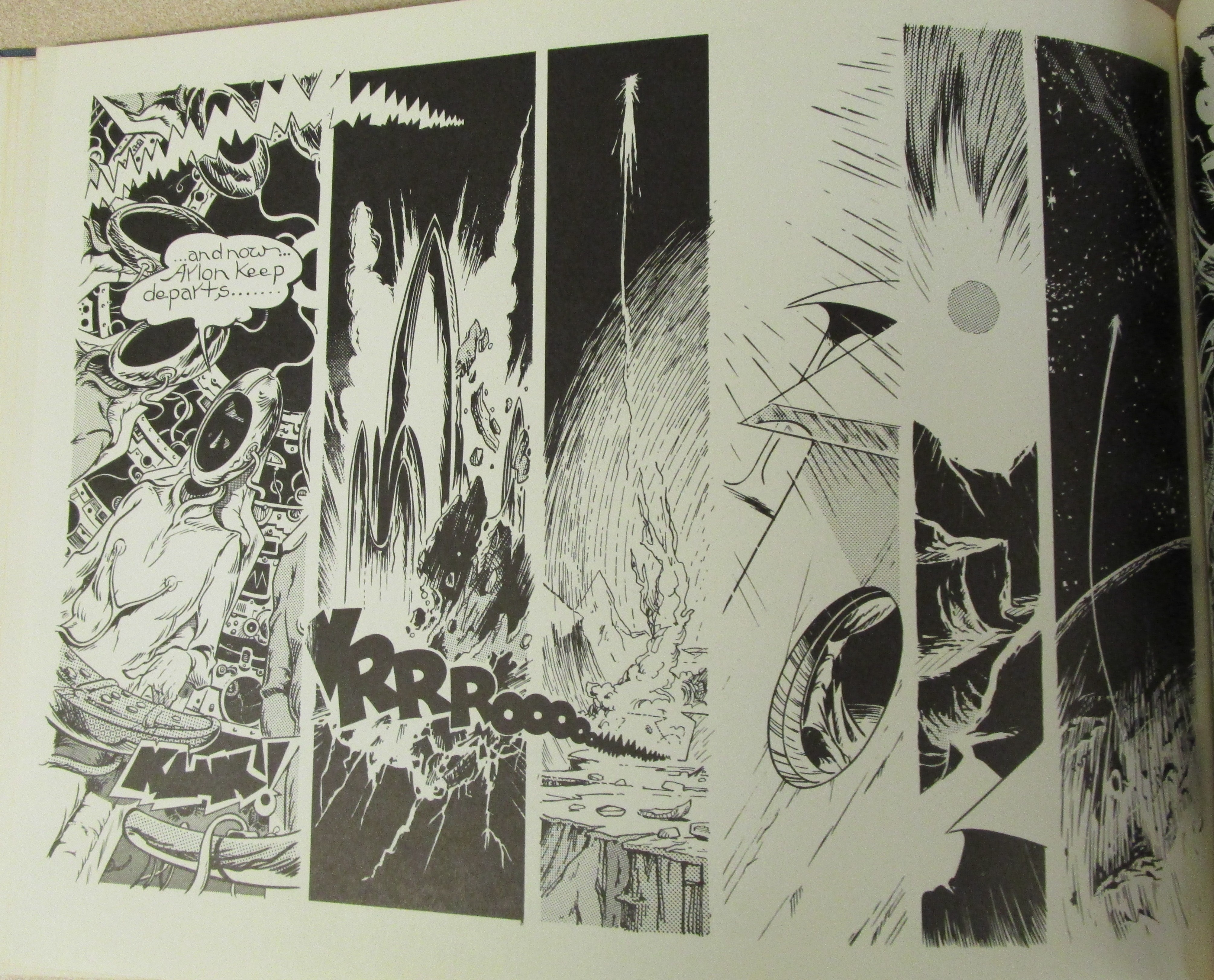 In the far, far future to which Seth journeys, only women are still alive, and he becomes the father of all humankind to come, seeding life right before the explosion of the Sun that ends the existence of the Earth (see fig. 5). This could potentially be an act of high hubris given the terms of my reading, a metaphorical prediction that the race of comics writers and artists who follow in Metzger’s wake will bear his evolutionary trace. But at the very end of the book, with Lolcraft trying to persuade Seth to share his knowledge, Panchandara tells the magician he must “seek it within your own mind. it [sic] is there!” [49] What we have in Beyond Time and Again is Metzger’s experiment, but other creators must conduct their own, not recreate this one. The book ends in a state of irresolution. Seth disappears at the narrative’s enigmatic conclusion, and Lolcraft, turning back to look over his shoulder, shares a moment of incomprehension with the reader (see fig. 6). What next for the characters… what next for comics?

(i) A detailed account of the life of the Graphic Story Bookshop will appear in my future book on the novelization of comics.