Did you see Andrew Harrison’s article “Framed! Meet the creators shaking up modern comics” in Sunday’s Observer (in The New Review section)? It was a big feature. I haven’t taken photographs for the blog this year, so here’s an idea of the space it received: 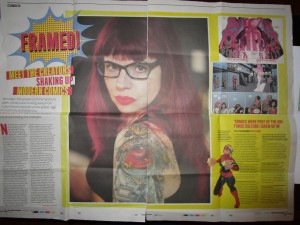 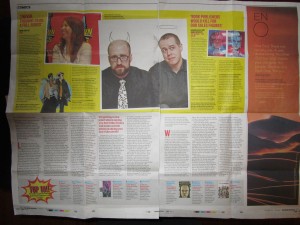 I don’t have an overall thesis so here are some random thoughts / responses:

I’m intrigued by the comics and creators grouped together here.  As far as categorisation goes, the article suggests the “most exciting comics” of today are characterised by “a broader, more accessible spread of themes than the super-books’ endless exploration of power and its consequences.” (14) A wide variety of genres is mooted, but the “Top Ten!!” for new readers to start with continues Harrison’s contention that the best new comics “are fuelled by the pulpy, pop-art immediacy and sense of wonder” (14) that made comics so popular earlier in the twentieth century. Broadly speaking, the recommendations in the Top Ten could be labelled as SF, horror, and – despite Harrison’s reservations about the genre’s relevance – superhero comics.

The Top Ten would make a fascinating syllabus for a module on contemporary comics, and it would prove a very popular course, I imagine. But what would be the module themes, what discussions would recur from week to week? Some essay questions spring to mind:

I suppose I’m thinking out loud because I really do think the Top Ten would be a successful module and because I can’t make up my mind about the following questions:

The URL for the article makes me wonder if it was entitled “Kapow!” at some stage.

I hope not, because that would make me sad.

“Image was mostly known for conventional horror and superhero titles until around 2008, when it began publishing less easily categorised, creator-led comics to sudden acclaim.” (17) I accept – completely –  that a four-page Observer article is not the place to write the history of Image (although if someone isn’t doing that already, I’m there). But I want to add Image was always a more odd company that this suggests. Creators like Mike Grell and Jeff Smith were publishing comics that didn’t fit the early 1990s Image mould (bulging muscles, thinly clothed beautiful women, and large guns). Nabiel Kanan and Kyle Baker were doing significant work for them before 2008 too. My hunch is we’re not seeing a step change in the history of Image but something more gradual.

This was the main historical point on which I felt moved to comment, which says something about me, I know.

I was pleased to see The Observer looking at contemporary comics and impressed by the space it devoted to the subject. And I’m still thinking about the last lines:

“Comics people are depressive people,” says Kieron Gillen. “We always think the glass is half empty. But this is what winning feels like.” (17)