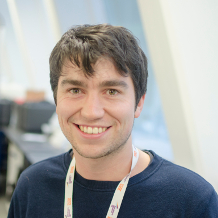 Tom received an undergraduate masters (MSci) in ‘Neuroscience with study in industry’ from the University of Bristol, during which time he spent a year working at Eli Lilly on new drug targets for cognitive impairment in Alzheimer’s and Schizophrenia. He moved to Exeter in 2013 as a PhD student under the supervision of Dr Jon Brown and Prof Andrew Randall and is now employed as a post doctoral researcher in the Exeter Applied Neurophysiology group.

Tom is interested in how neurological diseases such as Alzheimer’s disease and frontotemporal dementia produce changes to neuronal networks that ultimately affect cognitive processes. He uses in vivo electrophysiological recordings to measure the activity of neurons from awake-behaving mice, either at the level of single-cells or through large-scale neuronal networks. His current work focuses on the medial entorhinal cortex, one of the first areas to be affected by Alzheimer’s disease pathology, which is which is essential for processing spatial information.