Posted by Jonathan Cresswell on 02 June 2016 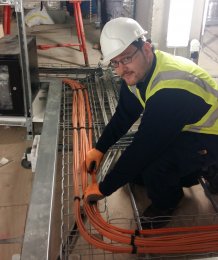 The Engineering and Direct Works in Campus Services has been providing apprenticeship opportunities for those looking to develop their skills and begin a career in the Gas and Electrical Engineering trades.

James McIntyre is nearing the completion of his electrical apprenticeship which has culminated in a fantastic opportunity to work on the £52 million Living Systems building alongside main contractor BAM. James has assisted with the wiring of the building and broadened his skill set along the way.

“I have had a fantastic opportunity to work with electrical contractor NG Bailey, gain first hand understanding of how electrically this facility works and be part of something truly inspiring.”

Georgie Rand and Jon Ireland, also began their apprenticeships in 2014, focussing on the Gas trade, and are currently working towards their Level 3 awards. Alan Orgee, Gas Service Manager at the University of Exeter, said:

“Jon and Georgie both started with us in September 2014 and have been working really hard towards their accreditation as Commercial Gas Engineers. The University of Exeter offers a unique working environment for apprentices, with a variety of appliances and different systems to work on.”

The opportunities provide for James, Georgie and Jon are part of the University’s ongoing commitment to apprenticeships which was recently recognised by Exeter College who awarded the University – Corporate Employer of the Year.