Early November saw my first attendance at the Entomological Society of America Annual General Meeting in Portland. Having established where it was (*cough*, thanks Google) I was very excited to be going and very much appreciated the invitation from Elinor Lichtenberg and David Crowder. Unsurprisingly, as everything is bigger in America, the ESA was massive. There were anything up to 15 sessions running concurrently – it was no problem finding sessions I was interested in, and as I was trying to go to both pollination and pest regulation talks there were quite a few things I would’ve liked to have seen that clashed.

It was interesting getting to grips with a different continents worth of research – there were not many Europeans present. The concerns in the pollination sessions I went to were similar to those in Europe – a lot of interest in creating semi natural habitats, carefully designed wildflower strips that flowered at different times of year to support pollinators (but not species that flowered while the crops were flowering). I particularly enjoyed talks Claire Brittain’s talk using the InVEST model at a small scale to look at how field margin placement might affect pollination within the crop and Neal Williams on selecting different flowering varieties for use in margins based on plant traits and economic costs. The Xerces Society seemed to be really well funded to provide outreach encouraging pollinator friendly behaviours in farmers – such as demonstration farms – in response to my question the person did say they would be testing which out reach was most effective although unfortunately he didn’t really have time to expand on how.

There were some great talks in the natural enemy pest arena as well – too many to mention – but I particularly enjoyed John Tooker’s talk (published here) indicating some unintended consequences on natural enemies of seed treatments. There was also a lot more use of cameras to establish exactly what/who was eating seeds or pests which is fairly new to me.

I also went to a few things out of my comfort zone. They have session for folk who are very much from the industry side – I went to one about how the neonicitinoid seed treatment cruiser was an important part of the farmers toolkit. Which it is, but it was a data light talk and no mention of the fact there is a moratorium on its use in Europe. There was no time for questions which saved me from the dilemma of whether I should raise this point!

All in all it was thoroughly interesting and well organised conference and I would recommend it to anyone.
Pho 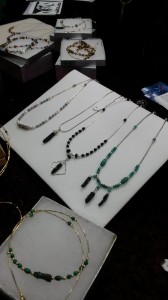 to: some of the trade exhibits at ESA 2014. A stand of jewellery made by caddis fly larvae. If I’d had an office and an attitude I would have also been tempted to get this sign. 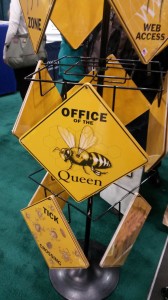 Having established which ESA (not the Ecological Society of America people, dur) and where it was (how embarrassing, thanks Google) I was very excited to be going.