Posted by Eleanor Louise Marshall on 10th May, 2019

Written by Ruby Xiao (肖远), who studied at the University of Exeter Business School 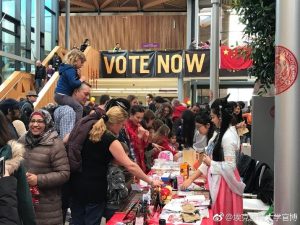 Chinese New Year (Lunar New Year or the Spring Festival 春节) marks the beginning of a new year according to the lunar calendar; it is an important festival in Chinese as well as neighbouring cultures for family and friend reunions. This year, 25th January will initiate the Year of the Rat.

In Exeter, when the date of Chinese New Year is within term time, groups of friends gather together for a nice meal, call their family and friends to say season’s greetings, and go to a range of events on campus and in town to celebrate the festival with friends from different cultures and backgrounds! On 2nd February 2020, the annual Chinese Market is back and waiting for you in the forum. Come and learn more about Chinese culture and get some goodies and face painting, before the fireworks in the evening!

Apart from getting together with loved ones, there are a range of traditions that many people call symbols of the Spring Festival, like these:

This is the most important family meal in the year. It is normally on New Year’s Eve. Family members prepare their speciality dish for the meal. Different dishes will be put onto the table and enjoyed together with blessing wine. Dumplings are a traditional staple food that’s popular especially in the northern part of China. Some people may have other staples. For example, in my hometown Hangzhou, we have glutinous balls (Yuan Xiao 元宵 or Tang Yuan 汤圆) for breakfast on the first day of the New Year.

Some families make dumplings together from scratch; from the skin to the stuffing, and from folding to boiling. It’s also a fun activity students do in Exeter. Here are pictures of some of us preparing dumplings together. Making dumplings from scratch is not only for the great flavour and fresh texture; it’s also about chatting and enjoying the moment with loved ones. Hot pot is another popular dish during Spring Festival, especially in the middle part of China. In fact, it’s getting so popular that people enjoy having it all year round. It’s a hearty food to have especially in winter with friends and family sitting together around the table.

Each year is named after one of the twelve corresponding zodiac animals: Rat, Ox, Tiger, Rabbit, Dragon, Snake, Horse, Goat, Monkey, Rooster, Dog and Pig. There are a lot of cultural meanings and explanations behind the Chinese zodiac (Shengxiao 生肖), and there is going to be a stall at the Chinese Market on the 2nd February that will help you learn more about it and find out which zodiac animal you have. This year is the year of the Rat. People who were born in the same zodiac year sometimes have something red either as decoration or as part of their clothing to protect them from bad luck.

This is a TV show that families and friends watch together during or after the New Year’s Eve dinner. It normally includes singing and dancing, Chinese cross talk (Xiang Sheng 相声), comedy sketches (小品) and seasonal greetings. Although the popularity has been declining as other options have occurred, it is still a tradition and a symbol of the festival. Sometimes we have it on in the background while celebrating new year.

One of the traditional meanings of setting off firecrackers is to scare off a legendary monster named Nian (年). It will normally last for 3 days, but it can go on for one or two weeks as well. Nowadays, it has been regulated due to air pollution concerns. In the evening of the Chinese Market day (2nd February), there is going to be a firework display outside of the Xfi Building, Business School, for all of us to enjoy, make sure you reserve the time in your calendar!

Red represents good luck in Chinese culture. During the Spring Festival, you will find red decorations in many places. Here’s a picture of the red lantern display on Exeter High Street from last year. A red packet is an envelope of lucky money given to children during Spring Festival for good wishes and blessing.

In some areas, Mah-jong is a popular recreational game people play especially during the Spring Festival. It is a type of card game played with Mah-jong tiles as shown in the picture below.

How do you celebrate the New Year in your culture? We’d love to listen to your story!

« 7 steps to apply for a Masters programme in the UK
Student blog: Spring Gala (春晚) in Exeter »
Skip to toolbar