Towards a Geology of Morals

Inspired by thoughts of the granite in its molten form, twisting and pushing through even older rock structures, these experiments aimed to allow the granite to direct an aspect of its own formal structure — I accepted how the granite would disintegrate and reform as a reflection of its own grown properties.

From 2012 to 2014 I worked with Liz Mehan from Falmouth University’s Contemporary Crafts course, experimenting with finding the right set of conditions to melt and fuse the granite using electric kilns.

The process by which the granite pieces are fired worked as follows: the granite was dried in a drying room to evacuate any moisture; it was placed on a plaster base with a coating of alumina oxide dust to prevent sticking; the kiln rises to temperature over a day and a half and then was left to cool over another day and half. The series of tests, where I made forms for the granite to slump over, showed how the granite completely fell apart and then knitted itself back together as it reached its optimum temperature of 1280 degrees centigrade. Test pieces that reached only 1200 degrees did not hold together when cooled. It was always a surprise to see how the granite behaved, and as it cooled and vitrified (the silicates in the granite are essentially forming a glass), it found its resting point. 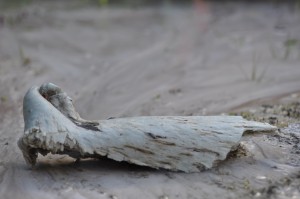 I collected a sample of sludge from where it used to build up at the bottom of the quarry, and dried it out into a fine dust. The dust was placed in a crucible and fired in a bronze furnace where it reached 1500 degrees centigrade. The dust attained a molten state, but was not pourable. Once cooled the dust had metamorphosed into a pale green glass.

I worked with ceramicist Jack Doherty’s hand built gas kiln in Newlyn. The process of firing the stacks of 100mm setts took 10 hours. We started at 9am and finished at around 9pm. We then left the kiln to cool over night before coming in the next morning to bring them out of the kiln. The gas kiln removed much of the colours from the granite, leaving them with subtle greys and burnt umber colours. I used a range of granites from Dartmoor and Carnmenellis. I also found some samples of Scottish granites at the quarry and used them in a few of the stacks.