The Event of a Thread

On visiting this exhibition of the work of hand weaver and artist Anni Albers, it is immediately apparent how contemporary the work seems, as if the intervening eighty plus years have been erased through one artist’s vision, innovation and persistence.

Albers began her career at the Bauhaus School in Dessau, Germany, moving disciplines until settling in the weaving workshop, where, amongst other talented students, all women, she made her mark as an experimental and technically accomplished weaver of inventive textiles, produced for various purposes and even as art pieces in their own right. She was the first weaver to have a significant solo exhibition at the Museum of Modern Art in New York in 1949.

At the Bauhaus she came across teachers such as Paul Klee and Vassily Kandinsky.
She was fascinated by thread and its implications, seeing not only a practical material but she became aware of a deeper sense of meaning and relevance. For Albers: 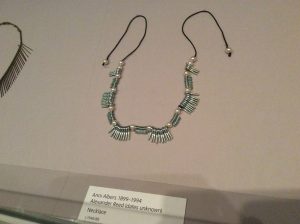 In 1947 Albers began to sketch and paint entangled, linear structures. 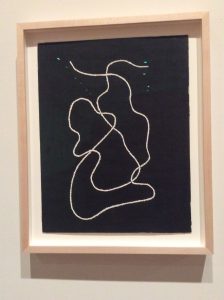 Drawing for a Knot
Gouache on Paper
1948

The subject and the abstract shape of the study of the knot had resonances with the way Sarah and I had been looking at knots at the first workshop we  participated in at the the Repair Acts seminar at Penryn in October 2018 (see earlier post).

In one of the quotes from the exhibition Albers describes her closeness and innate connection with her materials, even when working with print and paper, when she states:

Thus Sarah and I have decided to call one of our exhibits in our forthcoming exhibition in Penryn  an ‘Event of a Thread’, in acknowledgement of Alber’s insistence that to see a particular yarn as an object is not the whole story. The   thread is  precursor to what it may become in reciprocity with its maker. As as  a ‘happening’, an event, a thread  holds  potentia:  it is  a process of material beginnings and becomings, emphasising the ‘ever extending relationships’ that Albers describes at the beginning of the post. 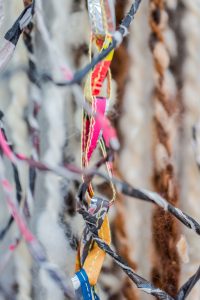 Last week we asked you of all clothing produced, how many % ends up being burned or in landfills within one year of being made.
Here's the unfortunate answer.

Learn more during one of our virtual tours!

Last week of our exhibition at the Environment and Sustainability Institute, at the University of Exeter in Penryn. It’s been a great opportunity for us to develop and share our thinking on ‘deep materialism’. Now looking forward to taking this thinking forward.

Something our UK government needs to do!

France will ban the destruction of unsold products, including fashion garments in a move to combat waste and put consequences on overproduction: https://t.co/fckkzzGxYy

How can we get our children playing outside again? https://t.co/KmaeFFdDSv @guardian @forestimaginatn