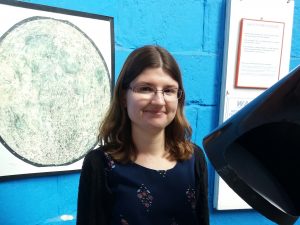 Alison Young is a final year PhD student in Astrophysics. Her research involves working on computer models of star formation and, in particular, bridging the gap between theory and observation to verify our understanding of how stars are born.

Scientists are humans. OK, so what does it matter? Science can be tough. It is normal to put in long hours; we compete for grants and jobs; science careers often involve moving to different countries. Then there is the very evident lack of diversity. As humans, we all have lives outside of science and having a disability, caring for children, illness or being a minority at work, for example, can make it difficult for scientists to do their science well or even to stay in STEM. Scientists Are Humans grew out of a project I worked on at the STEM Gamechangers workshop at the Alan Turing Institute over two days in September and we’re interested in supporting the humans behind the science.

The aim of Gamechangers was to bring together people from all over the UK who are working on initiatives to increase diversity in STEM so that we could swap ideas and design projects to really make a difference. The room was filled with 40 truly inspiring people from undergraduates to business HR officers. There were women who had spoken out about harassment, a BME woman who had fought against sexism to study engineering and won Young Woman Engineer of the Year, and several people who bravely spoke out about their mental health difficulties. There was a founder of Pride In STEM; someone who teaches disadvantaged children to code; founders of several women’s networks… They spoke about their experiences candidly but not without humour. Many said this was the first time they had felt completely “at home” and accepted with other scientists.

Over the two days, my group developed the project “Scientists are Humans”. We realised that science could be far more inclusive if it was kinder and if we could share stories from real humans about their experiences and tips of how to make science better. We put together a manifesto for building a better STEM. The idea is simple: “Be more kind”. Expanded a little, this involves suggestions such as seeking to understand the experiences of other scientists; building kind teams where we support our colleagues; and developing a better work-life balance ourselves and helping others to do the same. We would love for every scientist from undergraduate to professor to sign up to this pledge.

We have put together a website to share stories and tips through short contributed articles, that scientists at all levels can use to help support themselves and to help understand how they can better support their colleagues and students. It is our hope that we can all build a better, kinder STEM through listening to each other’s experiences and supporting each other to achieve all we are capable of.

Written By: Alison Young, PhD researcher in Astrophysics. You can find out more about Alison and her research by following her on twitter @AlisonYspace.