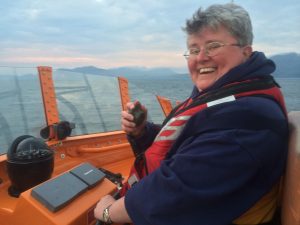 Dr Sam Jones studied Law at the London School of Economics (LSE) before being awarded a DPhil in Socio-Legal Studies at the University of Oxford in 1992 where she researched compensation for victims of mass accidents such as the Herald of Free Enterprise capsize and King’s Cross fire. She had a 20 year public service career in Whitehall, Stormont and the Scottish Parliament. More recently she has run her own photography business, worked in consultancy and local development and been involved in dealing with handling complaints against the legal profession north and south of the border. Having served on the lifeboat crew, Sam is now the volunteer Lifeboat Operations Manager at Tobermory RNLI lifeboat station in what spare time she has alongside a full time job and a part time PhD.

I am a part time, distance learning PGR at the Centre for Maritime Historical Studies. In terms of the UK, it would be hard to be more distant as I am lucky to live on the Isle of Mull in the Hebrides.

My distance from the university means that the Researcher Development Programme and the opportunity to attend webinars is really important, not only in terms of my own skills development but also in feeling connected to the university and fellow students. I have found that they really fulfil these goals. As someone who had been out of education and academia for 26 years before I commenced my PhD, the webinars have also helped me update my knowledge on modern approaches to research. My DPhil was BTI (before the internet) and even though I am now I my second year, I am still overwhelmed at how much primary and secondary material is online. The days of trekking into a library every day and spending a small fortune on photocopying articles in dusty journals feel like ancient history.

My journey back into academia began when I joined the local Royal National Lifeboat Institution (RNLI) lifeboat crew here in Tobermory ten years ago. Having always had an interest in history, I became particularly interested in the RNLI’s own rich history. Whilst lifeboat design and rescues have featured heavily in books about the institution, not much has been written about the leadership, governance and development of the organisation and there is surprisingly very little academic research. The RNLI was founded in 1824 and I am excited to be on the Scottish Regional Panel for planning the bicentennial celebrations in four years’ time. However, my particular focus is on the RNLI in the second half of the nineteenth century. The re-organisation which took place from the 1850s onwards laid the foundations of the modern RNLI. It also saw the RNLI accept a subsidy from the government for the only time in its history. That is until a few weeks ago when the RNLI furloughed around 400 staff through the UK government’s Covid-19 job retention scheme.

The range of webinars available through the Researcher Development Programme is really broad and I have enjoyed not only learning about aspects which are relevant at my early stage but also dipping into issues which I will face much further down the line. There was a particularly good panel discussion on publishing your thesis last week, not least because it was inspiring to hear from fellow students who have not only survived their PhDs but have published their work for a wider audience. I really enjoyed my DPhil first time around. Or at least I must have forgotten all the bad and stressful bits for me to go through this process again. However, my one regret was that I didn’t publish my work, despite the encouragement of my supervisors.

I have found the online ‘Shut Up and Write’ sessions particularly useful. The discipline of writing alongside peers in 25 minute blocks is so conducive to being productive. In five sessions in the spring last year, I wrote 6,273 words. Not all survived the final edit but as we all know, just getting words and ideas down on paper can be significant progress.

Above all, the webinars and online writing retreats make me feel connected to the university and also to my fellow PGRs. Whenever I visit Exeter, I try to link up with fellow students. One of my friends who I always see for a coffee when I’m down in lovely Devon even made it all the way up to Tobermory last year from Salcombe, although our refreshments here were more of the alcoholic variety.

I look forward to making new friends via the webinars and writing retreats, especially as there are so many taking place at the moment. I really can’t recommend the ‘Shut Up and Write’ sessions enough. If you haven’t tried them, give them a go.