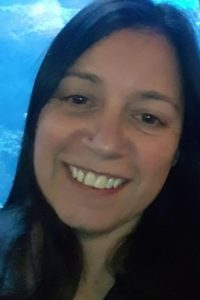 Heather Wren is a PhD student in Education. Her research explores empathy in education in relation to the environment, looking at it through a New Materialist lens so that the nonhuman come to the forefront of the research alongside the human to provide a more-than-human outlook.

This blog is written by me and my half-sister who share the same Indian father. My sister Karina has Indian heritage from both of her parents whilst my mother is white British. We grew up in different generations (me in the 1970s and 80s and Karina in the 1990s) and in different parts of the UK and had no idea each other existed at the time. Since meeting we have talked a lot about our experiences growing up and racism against us is something we have both experienced all our lives. We write this blog to share these experiences which now span nearly four decades in the hope of bringing awareness to the long fight ahead that we all have as anti-racists.

I never knew my Indian dad as my mum left him when I was a baby in 1971. Following this we lived at my grandparents’ in a decent area of Birmingham until I was 10. During this time, I had absolutely no idea that I was ‘different’ as nobody ever mentioned my mixed race. As I was to find out, this was an early lucky escape due to the heavy presence of groups with racist ideologies such as The Anti-Paki League and The National Front who had sprung up in Thatcher’s Britain when she declared that Britain was ‘swamped by people from other countries’.

When I was 10, we moved out of my grandparents’ house and moved into a council property on a Birmingham estate. The first day at our new house I went to play outside. Whilst playing, a much older lad came up to me, called me a Paki and kicked me down in the middle of the road. He kicked me a few more times when I was on the floor and told me to go back to where I came from. I was 10. Years. Old. Shocked and traumatised, I ran back to my house crying. I had no idea why he did that to me. Why did he target me in particular? What did he mean go back to where you came from? This was to become a regular occurrence in my life.

Following this event I was often spotted by other children who called me a Paki and barrage me with both verbal and physical abuse. In particular a gang of three girls would beat me up every single time they saw me. Then an older girl started to join in. One day I was walking on another estate and I got singled out by a kid with an air rifle who shot me in the head. By this time, I was 11 years old and had suffered one year of constant abuse for having slightly different coloured skin to them and black hair. The children got to know where we lived and one day they sprayed ‘Pakis’ go home’ on the front of our house. There were also threats made to burn us in our beds so I couldn’t sleep at night.

I began to tell lies about who I was – telling everyone I was Italian to try to stop the abuse. I put talcum powder on my face to try to whiten my skin. I was so angry with my dad for being Indian. I hated him. My self-esteem bottomed out and I was further abused as a result. I felt depressed and suicidal most of the time. My anxiety shot through the roof and I eventually started to run away from home because I couldn’t cope. I felt like I was in a constant state of shock. After running away on and off and sleeping rough for about a year, I was put into care for my own safety. I stayed in care until I was old enough to leave home.

Growing up mixed race in the 1980s, I didn’t feel like I belonged anywhere. This issue has stayed with me throughout my life and I find it difficult to accept society as I feel that it failed me. I also have found it difficult to settle anywhere, join groups, stay in a career etc.

Lately, I have gained a degree, a PGCE, two master’s degrees which focused on inclusive education and I am currently studying a PhD. What has kept me going through this is the thirst for social justice fed by my own abuse. I have recently begun to research post-colonial education where I finally feel I belong. It makes me feel like I have the power to make change. With recent energy directed towards protests it has made me sit up and take action more. I am hoping that this blog is part of that action.

I grew up in Greater London in the 1990s with a single mother and a brother. During this era, I never experienced overt forms of racism such as that suffered by Heather in the 1970s and 80s. However, it was the period where Stephen Lawrence was murdered just because of the colour of his skin. Obviously as a child I wasn’t aware of institutional racism and the impact it could have for people like me. Nor was I aware of micro-aggressions related to race faced in everyday conversations (a micro-aggression is subtle and often in the guise of a compliment; for example often people asked me if I were ‘mixed race’ as I appeared more ‘liberal’ than Indians and well spoken).

My mother moved to the UK from north India in the early 1980’s where she met my father in Birmingham. They had a failed marriage and in order to protect us from him she moved out of Birmingham and came to live in London. My paternal grandfather often told us stories about how he was invited to this country to rebuild it after the war. He was a carpenter and proudly retold stories about his handywork. He juxtaposed his proud British identity with feelings of being unwanted and not belonging; as he often told us stories about signs outside pubs that said ‘No Blacks, No Irish, No Indians, No Dogs’. Now that I am older, I can’t imagine how he navigated such a world so openly opposed to him, whilst also so desperately requiring his services.

Due to the representations of Indian women as highly stereotyped and almost caricatured in the media, I battled with dual identities; of being Indian and different and also of my British culture and wanting to ‘fit in’ with my peers. I recall feeling embarrassed if my mother spoke to me in Punjabi in public or feeling worried that I smelt of Indian food. This is ironic now as I love Indian cuisine and am proud to be bilingual.

What I now find most frustrating is the question by strangers or acquaintances of ‘where are you from… no I mean REALLY ‘where are you from?’ The question they are asking is not my geographical location in the UK but of my cultural and ancestral home. It always confuses me why people choose this wording; it tells me they think I simply could not be from the UK based solely on the colour of my skin. It always makes me wonder how educated they are about Britain and in fact all of Europe’s colonial history. Our curriculum in history never taught me about the thousands of Indian soldiers who enlisted and supported the war efforts. Our history books never taught me that grains of rice were sent from India to feed the UK population whilst there was a famine in India during the Second World War. If perhaps this was taught more clearly perhaps people would not ‘other’ me so quickly by asking me where I am really from.

I hope this blog helps to shed light on our experiences of non-white British people and help you to understand that we are more alike than different.