As a group, we have chosen to analyse the expressionist techniques used within Nosferatu. F.W Murnau’s directorial choices within mise en scène and cinematography have produced techniques that encapsulate the German Expressionism movement. 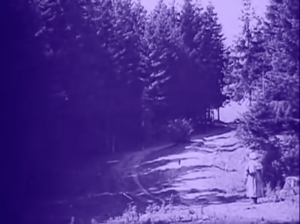 Whilst working with the natural landscape, Murnau exhibits his directorial flair whilst honing in on expressionist techniques in order to convey the “horror of Nosferatu”. Throughout the sequence, the location depicts elements of expressionism; specifically through the choice of set, lighting and on-set location shooting. It may be argued that because of the on-set location filming environment, expressionist techniques are harder to control,as directors would have to toy with the natural lighting in order to create and emphasise elements of expressionism. However, it can be noted that throughout the sequence, Murnau successfully employs credible lighting techniques to emphasise the distortion of the natural landscape. This is specifically noted through the harsh, angular shadows cast by the trees; perhaps comparable and reminiscent of the studio space of Robert Weine’s ‘The Cabinet of Dr. Caligari’. A natural space could be deemed as difficult to work with, however, Murnau creates an uncomfortable space wherein the characters work in sync with the unsettling environment.  On the other hand, Wiene creates an intense and unsettling environment by utilising a studio space; a space teaming with jagged edges and uncanny shapes, these specific expressionist techniques conjure up a nightmarish environment that is constructed to suspend audience disbelief. It is therefore plausible to discern that Murnau’s efforts with tackling a natural, unpredictable space when recreating elements of German Expressionism, is perhaps commendable. It is accurate to declare that with both elements of German Expressionism working so congruously together; the unsettling environment and the portrayal of characters employing exacerbated acting techniques, the environment that Murnau created echoes the sentiments of Sigmund Freud’s idea of the “uncanny”. 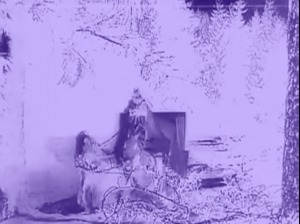 The idea of the ‘uncanny’ is echoed in the unusual technique of a negative image which is revealed during this sequence of Hutter travelling to Nosferatu’s castle, once having crossed over the bridge. This odd and rather discomforting technique embodies the German word ‘unheimlich’; resembling the unfamiliar or the unknown. Sigmund Freud directly quotes Schelling in his works ‘The Uncanny’;

“Unheimlich” is the name for everything that ought to have remained…secret and hidden but have come to light”.

The decision to evoke audience’s emotions through distortion is an element of German Expressionism, including the contrast of light, or lack thereof. Using a negative image could be seen as an evolving of the experimentation of extreme light and shadow. So, the decision to invert the image makes the frame much more discomforting than perhaps it would have been perceived if the inversion hadn’t been implemented. 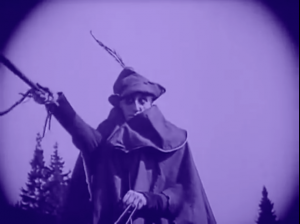 Expressionist aesthetics are exhibited particularly through the characterisation of Nosferatu. When compared to the artistic movement of expressionism, patterns and references are clear. Murnau has ensured Nosferatu’s costume is comprised of sharp edges and dramatic, angular shapes which reference this expressionist influence. His appearance is always bold and somewhat distorted to command his presence. The dark heavy rings circling his eyes are especially captivating as they indicate the antagonistic nature of Nosferatu’s character as well as acknowledging the German Expressionist movement. Nosferatu’s warped appearance, such as his elongated fingers and slender physique resembles the art of painter Edvard Munch. His work is evocative of psychological themes and manifests them in a twisted and “uncanny” way. Similarly, Murnau’s narrative surrounding the central character of a vampire is reflective of this mutilated reality in which horror and fantasy are masquerading in society. 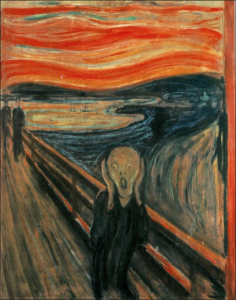 One thought on “Group C, Week 4 – Expressionist Techniques in Nosferatu”