“The film image must become graphic art.” Hermann Warm, one of the production designers of The Cabinet Caligari, followed this ideology whenever he was working on expressionist films. Rather than focusing on visible objects, some have described German Expressionism as a depiction of the incongruous relationship between human emotion and the surrounding world.

Well-known by its distorted and anti-realism characters, elements of expressionism began to be vastly observed in German cinema after World War I. Many historians agree that the release of The Cabinet of Dr. Caligari in 1920 represents a new film movement – German expressionism.The film has such a heavy focus on its elaborate but overt set design and acting techniques. Robert Wiene, the director, was, in fact, a fervent follower of the expressionist movement taking place at that time, by placing human actors in this world which is so obviously fake – haunting as it is, straight out of a child’s spooky fairy tale – the director is emphasizing this feeling of incongruousness. The contrast emphasizes the distance between human emotion and the world surrounding them but instead chooses to portray the world (or, the physical) as this glorified, psychological being.

Expressionism movement began with artists expressing their feelings through paintings. Resemblances of expressionist paintings could be spotted from several frames in the sequence after the funeral where Cesare kidnaps Jane. Regarding traits of expressionism observed in the set-design and actors’ performances, each will be analysed by giving two examples from the sequence.

Wiene’s dark and twisted visual style of mise-en-scene comprises of uneven angles and landscapes that create a nightmarish aspect that is specific to the art movement. To acquire a better control over the expressionist styled mise-en-scene, a studio-built set was put into place. When Cesare is sneaking around the circus, tiptoes (pic. 01), the painted tents and houses appear twisted, sharp triangular shapes are juxtaposed to create a harsh, dangerous scenario. Kurt Schwitters’s Z 105 Portals of Houses painted in 1918 (pic. 02), along with this frame, exemplify how architectures are recreated in artworks during the expressionism period. 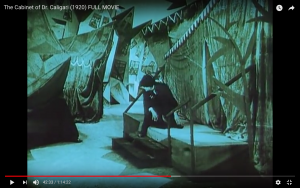 (pic. 01) Cesare sneaking around the circus 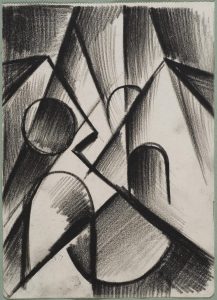 An expressionist artist, George Grosz, painted Suicide (pic. 03) in 1916 after his discharge from the army, attempted to express his ‘despair, hate and disillusionment’. Compared to the frame where Cesare has entered Jane’s room and walking towards her (pic. 04), deadly despair and threat can be felt while looking at them. Mass use of stripes and uneven shapes creates a prison-like atmosphere. 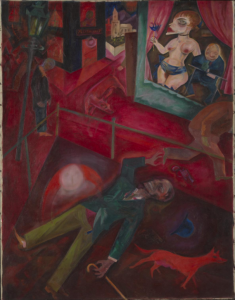 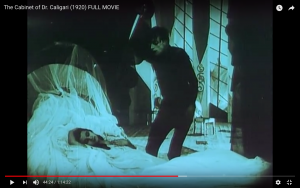 Emphasis on the actors’ figures is commonly seen in Hollywood cinema. Whereas in German Expressionist films, the sets and the actors’ appearance and movements are blended together as a whole piece. In most German expressionists film, performers’ move their bodies in a jerky, dancelike way that makes them seem psychotic. Conrad Veidt who played Cesare “blends himself into the represented milieu” when he crawls under the tilted oblique walls towards Jane’s bedroom (pic. 05). 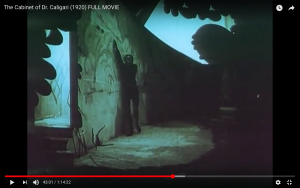 (pic. 05) Cesare crawls on the wall to Jane’s bedroom

Most significantly, resemblances between the expressionism elements in paintings and the grotesque, miserable facial expressions that actors show in close-ups can be observed. A flashing closeup of Cesare standing beside Jane’s bed, holding a knife (pic. 06), looks much alike to a poster – Murnau’s Head of Janus (pic. 07). Their expressions are both bitter, fearful. Eyelids and lipsticks are both dark, fitting the gothic character. 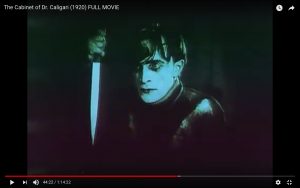 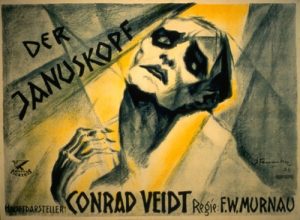 Right after this frame,  Cesare makes an attempt of touching the sleeping beauty’s head. She immediately wakens and shocked. The closeup of her trying to escape Cesare’s abduction (pic. 08), echoes with a famous expressionist painting, Edvard Munch’s The Scream (pic. 09). Every single feature on her face is wide opened, a very drastic, intense way of conveying extreme fear. Although different from the painting, there are no curve lines in the background, her arms are pushing Cesare’s head away in a distorted, exaggerated way. Looking at this classic frame in the film, audiences are allowed to immerse into the mental state that Jane is having. 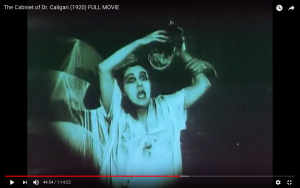 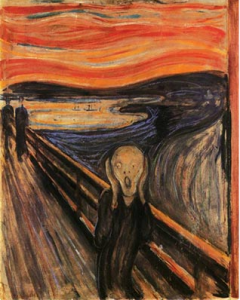 In summary, Expressionist techniques are very evident and profound in these sequences. The reason for this might be that post-war Germany was being torn apart by the Treaty of Versailles, which cut down heavily on the cinema industry as well as all other costs of living in Germany. Expressionist art was a medium that allowed the people to immerse themselves and relate to some of the dystopian, unsettling artwork. German filmmakers attempted to bring this artwork to life in the cinema, focusing each frame into a lifelike painting of its own, translating a piece of art into a life-size experience to the audience.