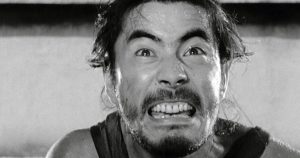 This article highlights Mifune’s role as a quintessential samurai film hero, not just in Japan but globally also. The quote ‘legendary leading man of Akira Kurosawa’ also shows that the two men are often linked together creatively, an auteur with his most frequent collaborator. This article emphasises the respect that Hollywood had for Japanese cinema, and the international acclaim that came with Mifune’s performances. Lastly, it shows the pride that Mifune took in the samurai image, as he was scared that the touch of Hollywood would weaken its effect. He understood the relevance of his films internationally and the effect that Kurosawa’s films had on western culture. Ian McDiarmid and Ray Park also comment on their respect for Mifune Kurosawa, and Japanese film in general, again highlighting the influence on Hollywood.

The article opens up about the life of the late Mifune, making light of his stardom immediately by calling him ‘the most internationally celebrated of Japanese film actors’ and continues to pay respect to the actor, highlighting his works and his apprenticeship under Kurosawa, a Japanese auteur film director who many of his films inspired western auteurs such as Quentin Tarantino.

The article then explains some more about Eastern culture and showing Mifune as an icon to the roots of Japanese drama and accentuating him as a symbol of ‘tateyaku’, which expresses the notion of a hardened, good-willed warrior as the plot’s hero. This was what Mifune’s stardom foundation was built upon, and the article continues to express how his physical prowess and speed in his movement, expressing that he only 3 feet of film during filming a sequence where as the average Japanese actor needed 10. This article more than anything shows why Mifune was such a star in cinema. He plays the badass, macho, sometimes arrogant character that can back it up with his crazy set of skills and blind courage as is often portrayed in many of his 120 films. It was what every man dreamed of becoming and what many women wanted in their lives. The article does a good job in paying respects to the actor and challenges the next era of stars, almost as if it were saying: ‘This is what HE was capable of. Now it’s your turn to show the world.’

“Toshiro Mifune just explodes onto the screens”. This is the first description we get as we look at the trailer of the Academy Award-winning film :The Last Samurai. Indeed this giant star achieved more worldwide fame than any other Japanese actor of his century. He embodies Samurai spirit and has inspired many artists. The narrator in the short clip even describes Mifune as the inspiration to the world’s most famous film character, Georges Lucas’s Darth Vader. We learn by watching this small clip that, even though Mifune never intended on being on screen, he ends up a passionate and devoted actor. He even analysed the movements of Lions to incarnate a more feline figure. The narrator depicts him as a “caged animal”.

Mifune was first found by  Akira Kurosawa with whom made 16 remarkable films during the Golden Age of Japanese Cinema, including Rashomon, Seven Samurai and Yojimbo. Together they thrilled audiences and influenced filmmaking around the world. 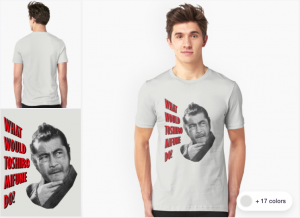 T-shirt with Mifune’s image on

While I was browsing through the products with Toshiro Mifune’s image on them, a T-shirt caught my eyes. It features Mifune’s image in Sanjuro. Touching his chin, he seems to be in deep thoughts. Pointing towards him are bold red words saying “what would Toshiro Mifune do?”. The picture and caption do not seem to match with each other, the picture shows a character Mifune played, but not himself. Would it not be more appropriate to ask what Sanjuro would do instead?

Not limited to the T-shirt, most of the items on this webpage feature Toshiro’s samurai image, such as a pillow with an image of him holding a sword and a phone case with a portrait of his fierce look. It seems that in the manufacturer’s eyes, Toshiro Mifune is the character he plays, a samurai. This exemplifies how the promotion of a star can be heavily based on the roles he/she plays in a film. Other similar examples are Marilyn Monroe’s sexy image: red lips and blown white dress in The Seven Years Itch, and Bruce Lee’s kung fu master impression: playing with chain-sticks in his yellow jumpsuit with black stripes in The Game of Death. Stars are remembered by the audience because of their iconic images. In most cases, these images are formed as the star frequently plays characters with similar traits. Although Mifune had played many different characters, the first image comes to the audience’s mind seems to be him as a samurai in Yojimbo and Sanjuro. But why wasn’t his pirate image in Rashomon, which has gained international attention chosen? The question may be resolved by paying a visit to the Madame Tussaud’s museum. Wax statues of celebrities all represent the most positive, appealing versions of them, such as Nicole Kidman, Ronaldo, and even Beethoven. The concept of a star itself is constructed and idealised, the purpose of its existence is for people to look at them and think “I want to be like him/her”. Through playing a tactful, loyal samurai, Toshiro Mifune is idealised as having the qualities possessed by his characters and that positive image, is what audience wants to remember and look up to.

One thought on “Group A: Toshiro Mifune’s stardom”