There are many aspects of film history which must be considered whenever writing about the subject, such as technologies used in film production, film movements such as the French New Wave, or prominent figures such as famous directors and actors. However, this blog post will focus mostly on political film history as a way of doing film history, and in particular will be looking at the question of whether politics and film can be divorced from each other and to what extent political history has affected film history. We will be doing this by examining Soviet cinema and specifically the film Strike (1925), firstly by giving a brief overview of Russian political history in the early 20th century in order to contextualise the film and then by moving on to look at the film itself in more detail.

Karl Marx’s proclamation that “The history of all hitherto existing society is the history of class struggles” (Marx and Engels 2) is an idea that, as we will see, was not only adopted by Soviet politicians and leaders but also filmmakers. Vladimir Lenin, following Marx’s ideas, led a now-infamous revolution in October of 1917 which eventually toppled the Tsarist regime, due to popular support from the workers given their poor conditions during the First World War (Behrent). In addition to the First World War, a civil war broke out shortly after the Bolsheviks took power, with the Bolshevik Red Army fighting against the White army, a coalition who did not share a single ideology but opposed the Bolsheviks. This meant that “Russia was in a state of constant warfare from 1914 to 1921” (Youngblood 10). Eventually, the Bolsheviks triumphed and the Union of Soviet Socialist Republics (USSR) was officially created in 1924, a one-party Communist state which aimed to enact Marxist ideals.

Most leading directors (such as Pudovkin and Vertov) during this period were supporters of the government (Eisenstein even fought in the Red Army) and this is evident in their work, as we will see later. Films came to be a very important medium for the government, especially since Russia at the time had the lowest literacy rates in Europe (Youngblood 15) so cinemas were arguably the most effective method of spreading their message. According to Kenez, the Bolsheviks did not aim to delude the population but instead aimed to educate them (2) and they were willing to use propaganda to achieve this because they believed that “the representatives of every social class used propaganda, the only difference being that the revolutionaries were in the position to tell the truth because history was on their side” (27). 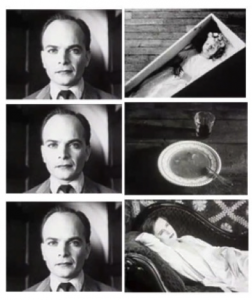 A series of photos illustrating the Kuleshov effect, where the same shot of a man gazes at a coffin, a bowl of soup and a woman

Because of their stated aim to inform and educate the populace, it was important for Soviet filmmakers to innovate new filmic techniques and methods, which they did with great efficiency. Kenez notes that directors such as Kuleshov, Eisenstein, Vertov, Pudovkin were influential theoreticians as well as filmmakers (52) and Kuleshov in particular was one of the foremost pioneers during this period, especially with regards to editing. The ‘Kuleshov effect’, as it is now commonly known, involved cutting between the same shot of an actor and images such as a child and a bowl of soup, creating the impression that the actor was expressing different emotions. This increasing focus on editing as not just a way to cut from scene to scene, but also as a tool to create meaning, led to the formulation of Soviet Montage, a movement which became hugely influential in the production of propaganda films in Soviet Russia, and thus was important to the Bolsheviks.

As aforementioned, the Bolsheviks placed a great importance on propaganda, and their consolidation of power resulted in increased Soviet propaganda, with Kenez stating that “the Bolsheviks were among the first to believe in the propaganda potential of cinema”. (2) They believed that the cinema was an important tool in displaying propaganda to a wider audience, leading to the films produced by Eisenstein during the 1920s becoming known as “celebrating the masses as heroes of history” (Kenez 4). Sergei Eisenstein stands as an unavoidable figure during this period of film history, imparting films such as Strike (1925) and Battleship Potemkin (1925). Eisenstein’s films were known as ‘revolutionary spectacles’ which “expressed, through in his own idiom, the ideology of the Proletkult” (Kenez 61). His affiliation with the Proletkult – a complicated culturally political movement within the working class, produced an emphasis on multitude of workers rather than the individual hero. Eisenstein was attracted to this movement, purely because it “justified the necessity of a complete break with the art of the “bourgeois” world” (Kenez 61), offering a powerful political ideology to the working class to dispute against the Soviet hierarchy. Eisenstein focused heavily on revolutionary subject matters and themes, yet was “content to act as a well-paid servant of an increasingly repressive state.” (Kenez 62). This juxtaposition showcases how influential cinema is in terms of portrayal of ideologies, and how concerned the prevailing leaders were about the representation of the revolution and the censorship of particular images. Censorship resulted in the projection of a utopian society, strengthening the desire within the working class to yearn for such contentment. “Documentary cinema was presenting a fantasy world where all was well in the Soviet bloc, and the working class, condemned to reside in the rest of the world, craved the same Utopia.” (Roberts 139). Documentary and newsreels were prevalent in Russia due to the rejection of narrative fiction film, used considerably as a method to promoting propaganda and the fabrication of a constructed reality. “Films allowed him to create an “alternative” reality, a “reality” that was a great deal easier to manipulate and transform than obstinate Russian society” (Kenez 5). The dismissal of inadequacy within the Soviet period proceeded to a composed and forged representation of society and a repressive positioning of cultural and political ideologies.

Soviet montage itself, created a cinema that relied heavily upon editing to convey a political message. Editing within Soviet montage is characterised by its overt construction, and is used to create meaning in the film, rather than narrative. Soviet montage disregards continuity and focuses heavily on collisions and the juxtapositions produced through editing, and Eisenstein often uses intellectual montage; a type of montage where two unrelated images are juxtaposed to create a third new idea, as seen distinctly in Strike. The relationship between the two images create a ‘shock effect’, enabling the ideology to be “brought to its emotional or dialectical climax” (Barna 85). Soviet montage carried a strong political theme and subject matter, focusing heavily on revolutionary subjects, class and status, physical conflict, and uprisings. Montage was used as a device in conveying a political message, and particularly for Eisenstein, to voice theories and ideologies to a mass audience. Soviet montage halted in the 1930s, due to the movement being heavily criticised for its inaccessibility and its diminution of political ideology. Socialist realism also aided the descent of the Soviet montage movement, with other nations influencing more conventional forms of filmmaking and audience’s desiring more narrative entertainment fictions from the West. However, Soviet montage is still influential within contemporary texts, providing editing techniques and approaches in expressing ideologies, showcasing not only its significance within Soviet Russia to connote political ideologies, but also how it has altered over history and can still be referred to as a crucial movement within film history. 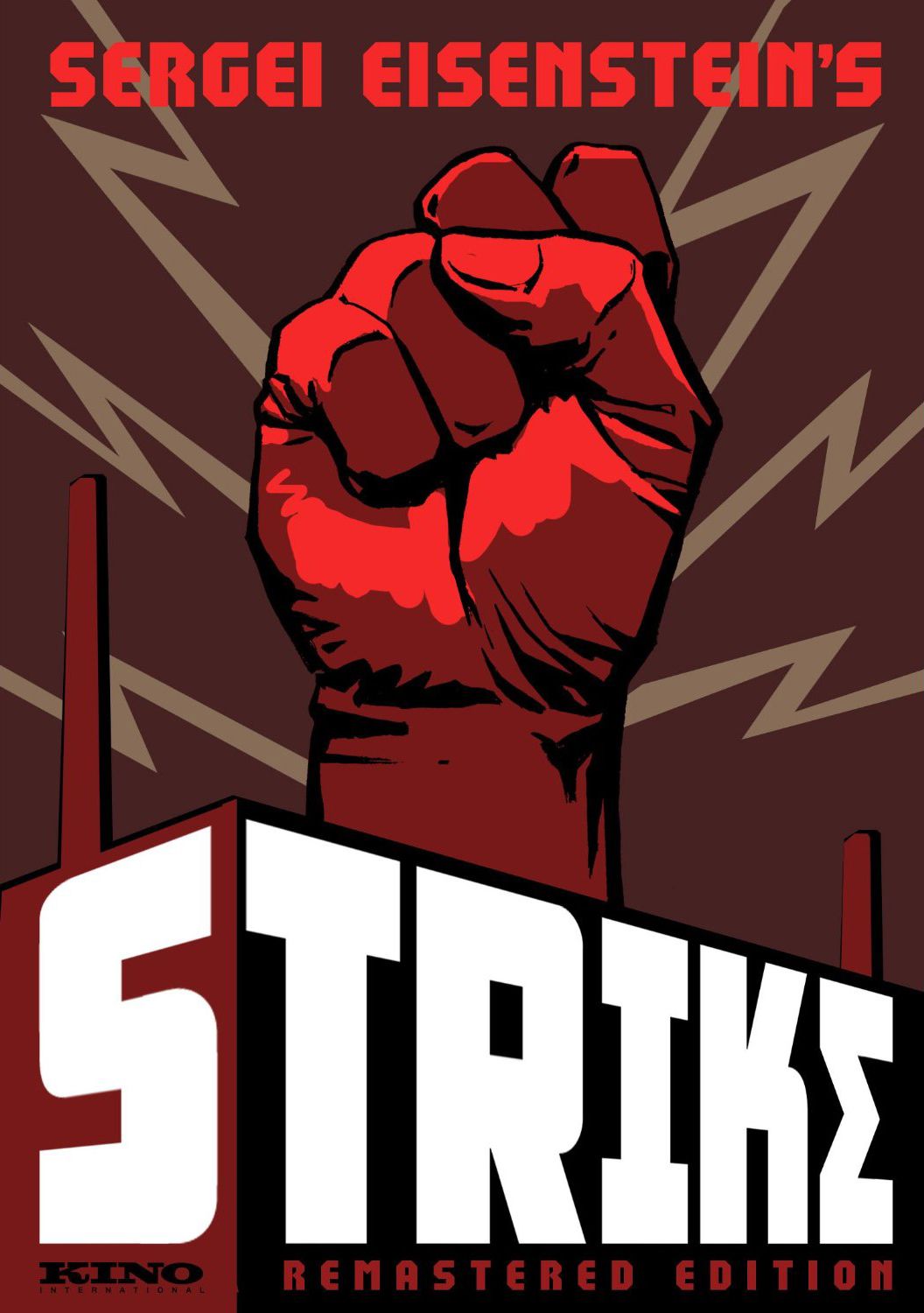 A poster for Sergei Eisenstein’s Strike

An example of an overtly political film of the montage period is Strike (1925), directed by Sergei Eisenstein. Eisenstein was well known for his innovative style and technique, able to express his ideology through composition and editing. It is notable for being a highly successful film which highlights the assemblage of montage, producing both a film that presents noteworthy film form whilst also conveying a political message. The film revolves around factory workers striking due to the harsh working conditions, portraying messages about the hierarchy they exist in and the hegemony they possess. Eisenstein produces these connotations through assortment and composition of images along with parallel cutting, which in turn, creates engagement and an emotional impact for the spectator. As stated by David Bordwell, “The engagement of the spectator arises more indirectly from Eisenstein’s use of symbols and signs” (9). An example of this would be the famous scene in Strike, in which Eisenstein uses parallel cross cutting to show an image of a bull being slaughtered and then the workers getting killed by the army. This use of tonal montage enables the spectator to attain an inference into the political ideology signified.

Strike was a pure experimental film, in which “the content of the film, he believed, should be unfolded in a series of shocks linked together in a sequence and directed at emotions of the audience” (Barna 80). His technique of fast cutting and the combination of oppositional images creates a jarring effect, which in turn, forms a shocking impact for the audience and provides an emotional connection for the spectator and these ideologies. In addition, Eisenstein heightens this engagement through ‘in-your-face filmmaking’. This is reflected by David Bordwell, who writes; “yanked out of the actual space of the action, it hits us with a perceptual force that goes beyond straightforward storytelling. Kinetic aggression, making you feel the blow, is one legitimate function of cinema.” (www.davidbordwell.net/blog/category/directors-eisenstein/ ) This sense of impact is overwhelming for the spectator and can effectively exhibit influential propaganda, as it will be deemed a more realistic representation, producing a sense of reliability towards the political exhibitions. Because of the ingenuity of films such as Strike, Barna argues that “montage was becoming a language, a means of communicating thoughts, emotions and even abstract ideas” (85), and with the majority of the lower classes being illiterate (as mentioned previously), montage was therefore an effective technique in which leaders could articulate and transmit their propaganda to all variety of audiences, making the cinema increasingly important in the USSR.

Taylor goes so far as to say that not only was cinema influential to the Soviets, but that it had “become the principal means by which ideology was transmitted through the medium of popular culture” (62). This idea is evident throughout Strike, as the film even opens with a quotation from Lenin, stating that “the strength of the working class lies in its organisation” which according to Bordwell lays out the entire theme of the film (51). This rings especially true given the film’s use of what Bordwell refers to as “collective intertitles” (57), where intertitles are alternated with shots of a crowd, making it seem as if the voices come from the entire crowd rather than just one speaker. This means that, true to Marxist interpretations of history, the film becomes about the conflict between the forces of capital and the workers, and “diagnoses those forces with which the working class must contend” (Bordwell 52).

The cover of Sergei Eisenstein’s book The Film Sense, taken from the Bill Douglas Cinema Museum

Sergei Eisenstein even wrote a book about how he aimed to convey his political beliefs through cinema, The Film Sense. This book is notable because it contains many of Eisenstein’s theories, and so provides supporting evidence for the Soviet directors being important film theorists as well as filmmakers. A chapter near the end of the book is also useful since it breaks down the final sequence of the film, giving us a short description of each individual shot. This allows us to analyse the sequence in great detail, as we are able to view the contrast between shots in a more objective fashion than if we were exposed to the gore and horror visually, and so helps us understand Eisenstein’s theories of film being a constructed medium which acts on the viewer. 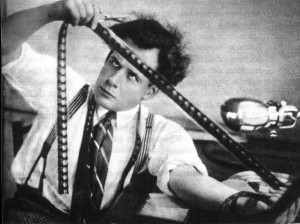 By Group B – Adam Connole, Megan Hartshorn and Amelia Barlow

Barna, Yon. Eisenstein: The Growth of a Cinematic Genius. Indiana UP, 1973.