Film history is the study of any and every piece of cinema made, from the first to the most recent and the context surrounding it that connects it to the real world. When it comes to ‘doing film history’, there is a multitude of methods therefore in order to research and study the films of our past, it helps to focus on specific countries or movements to really appreciate one interpretation of the artform. There are many ways in which to ‘do’ film history, and lots of starting points. You could focus on an auteur, or a country, or a movement, or even just a film poster and would be able to find out a lot of different aspects to one historical event. An event as large as World War II had such a massive effect that there are an infinite number of ways to find out about it. We think that film is unique in being able to capture both the personal and global details of war which is why we found the study of post-war Italian cinema so interesting.  Discussed in this blog post will be the innovation of Italian neorealism, post-war Italian cinema, and an examination of artefacts and scholarly writings as ways of exploring the world of film history. There is technically no definite answer when questioned ‘what the film/movement triumphed?’ so taking a specific like Italian cinema (neorealism) and exploring it will allow us to decide for ourselves what was successful and what should have stayed in the past.

During the second world war, the film industry was often controlled by a county’s government. This was to ensure that civilian spirits were kept as high as possible through depicting the war in a ‘positive’ light through glorified plots and images. Every film that was being made in Italy had to be approved by Mussolini, leading to the construction of the ‘Cinecettá,’ an enormous  studio that allowed films promoting Mussolini’s fascist views to be churned out relatively quickly.

Focusing on cinema in Italy, the effects were most seen after the war had ended. Post-world-war II Italy saw the rise ofthe Italian neorealist movement. This style of cinema focused predominantly on the difficult economic and moral conditions of a post-war Italy. The films would represent changes in the Italian psyche and conditions of everyday life touching on poverty, oppression, injustice and desperation. The impact of this movement was vast, not only with Italian film but also with French New Wave cinema. Film directors such as Bimal Ray and Satyyajit were influenced into India’s Parallel cinema movement and were both heavily influenced by Vittorio De Sica’s Bicycle Thieves. Andre Bazin categorised Italian films as having “an exceptionally documentary quality that could not be removed from the script without thereby eliminating the whole social setting into which its roots are so deeply sunk”

As the stories within these films are so naturalistic and raw, it is easy to believe that they may come across as real events. The only true way to understand and present an opinion towards this idea is to watch as many Italian films as you can. Simply watching the films seems an extremely obvious method of exploring the films of our history, but revisiting films and/or watching them with a particular thought or argument in mind will increase one’s understanding and education of said film. Bazin also suggested that “the war is felt to be not an interlude but the end of an era”. By watching films from different decades; before, during and after the war, we would be able to compare them and the differences between them all, noting the successes that continues through time and the failures that were short lived.

Italian neorealism was built on a set of restraints that exposed the country in the darkest way possible, exploiting the suffering and hardship experienced by its people. These building blocks would be the success and failure of the Italian neorealism movement which is why it was so largely popular yet so painfully short lived despite its resounding critical acclaim. Italian Neorealist films had a very specific set of characteristics. It was a very popular movement post war and had a very influential effect on filmmakers in years to come. The characteristics of neorealism are created on the basis of economic hardship and restraints. These restraints are largely what allowed the movement to become so popular. After the war, Italian studios were all but dusty remains, which meant that location shooting became a key feature of the new Italian neorealism rule book. This lead to some of the most iconic scenes in film history- painting the historical streets of Italy onto the silver screen at a time when cinema was all but dominated by theatrical style sets and flamboyant production styles. The other large component of Italian neorealism was the casting of regular people as opposed to professional actors. This made for a more authentic aesthetic which matched that of the location shooting. 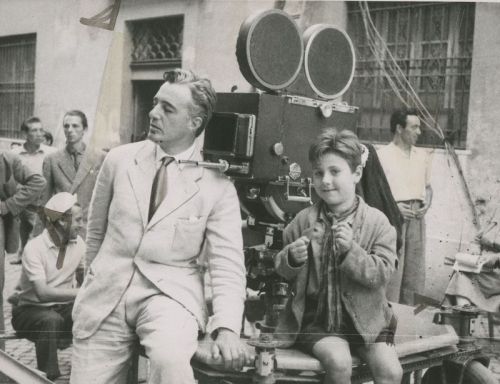 Working class characters were played by actual working-class people and this became a strong and well-known feature in the circle of Italian filmmaking at the period, even though there were a few exceptions that did accommodate the skills of seasoned actors- most notably ‘Roman Holiday’ staring Gregory Peck and Audrey Hepburn. Normal people fit the bill so well because so many of the narratives were working class based- often about how the people reacted to the German control and destruction from the war in every sense. Italian neorealism films rarely contain privileged protagonists which is why working-class stories became a consistent ingredient in the developing Italian neorealism formula. Although this formula created what was considered to be the “Golden age” of Italian cinema, and the fact that Italy’s problems are what made something surrounding it so beautiful, the Italian neorealism movement would ultimately become, in one sense, the product of its own downfall. This was due to the stories it was portraying as they were considered too depressing by political parties who wanted Italy to move away from the perception that they were such an impoverished nation, especially at a time when cinema was one of the only windows into another country. This downfall was also combined with genuine change and economic prosperity which questioned the true relevance of Italian neorealism films, reducing their impact and connection with a modern society who no longer felt like the characters depicted on the screen. Therefore, Italian Neorealism expired, despite its undeniable success and influence which is still ever present in modern day cinema.

In order to look more closely at neorealism, and to gain some more perspectives, we need to consider others ways of ‘doing film history.’ One way of further studying and exploring how films have impacted history is through the use of artefacts, which can tell us a lot about a film, and about the period the film was made in. For example, In the Bill Douglas Cinema Museum, there is a British cinema programme for Bicycle Thieves from the Curzon Cinema in Mayfair which labels the film an “international masterpiece” already giving us a clue about how successful the Bicycle Thieves was.

The Curzon Cinema is one of the oldest Cinema’s in London, and one of the first to “import and show foreign language films in the UK.” (Curzon Blog) It prides itself on continuing to show high quality art-house cinema and independent films, which is an indication on the high esteem that Bicycle Thieves was held in. The competitions and film makers club that are run by the Curzon Cinema group help to support new, adventurous filmmakers, who could eventually turn into the modern day De Sica’s and Zavattini’s, to comment on society for the next generations of film historians to study; “We champion filmmakers from the most diverse backgrounds and experiences.” (Curzon Blog) The Bicycle Thieves programme also includes a foreword from De Sica himself, providing readers with more information about the making of the film, and providing historians with more insight into what was promoted to viewers at the time to get them into the Cinema. De Sica explains why he chose to make this film and why it was important to him to show everyday life; “To see is very useful to an artist. Most men do not want to see, because often the pain of others troubles them. We, on the contrary, want to see. Our one aim is to see.” The programme can also tell film historians about the kind of marketing needed to get people into cinemas. The majority of the programme consists of a detailed plot summary, which seems odd in a time when spoilers are so significant in the marketing and release of some films. This could possibly show then how post war cinema goers did not want surprises in films, especially ones that show the aftermath of war on the poverty stricken in Italy. Perhaps this is why the neo-realism movement was rather short-lived in Italy, according to Nowell-Smith in his essay ‘The Resistance of Neo-realism’ “By the time Bicycle Thieves came out, neo-realism had lost much of its novelty value in its home country” due to the popularity of using cinema as a form of escapism. He goes on to say that “Internationally, however, the reputation of neorealism remained high, and the pioneers of the movement could count on a sympathetic reception at festivals and on the art-cinema circuit, and sometimes on foreign finance as well,” (426) which is perhaps where Curzon Cinema comes in. The information that can come from a single artefact is quite surprising and shows how so many different parts of cinema can be stitched together to create a more complete and rounded history.

There is no end to the study of this subject, as it effected so many lives, and in vastly different ways, leading to millions of different stories to tell. Film is able to express so much about an era or event as there are so many contributing factors, which is why it is such an important part of history itself. Even if the content isn’t a true story, or about a real event, the production, distribution, and exhibition, and even the posters for the film, can tell us so much about society at the time, and about cinema going. It is essential that, as film historians, we make sure to look at how many different sources can give information that might not be available in history books. Using a film movement is just one of many pathways to exploring film and using Italian Neorealism we have tried to map out its place in film history.