The Expressionist movement began in around 1908 as a style in painting and theatre all over Europe. The latter is important to consider when looking at the first German Expressionist film made in 1920: The Cabinet of Dr Caligari. The make-up, movements and staging are much like those you might find in theatre and this exaggeration is bizarre, creating a sense of unnerve and discomfort in the audience. This is also true for the narrative of Dr Caligari, which pairs a mad character with distorted, quirky settings in order to create this sense of discomfort.

We can see evidence of Expressionist techniques in The Cabinet of Dr Caligari through the use of distorted and personified mise-en-scene. An example of this is through abstract set design, using distorted shapes and lack of colour. Sharp angled windows and buildings, misshapen objects and the use of high contrasted shades of black, grey and white produce an unrecognisable world that is gothic and frightening. 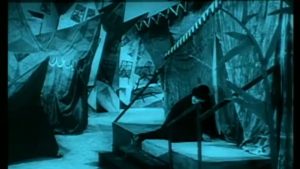 Looking closer, the acting is deliberately enhanced and over exaggerated matching the bizarre and theatrical mise-en-scene (30:08-30:20). In our chosen sequence, the stylisation within blocking of actors displays similarity to a stage performance. The decision to place the characters in a triangular structure balances the frame and allows the audience to focus primarily on the sophisticated acting of the protagonist (centered). The selected shot displays typical features of Expressionist acting; the actor exhibits jerky movements with naturalistic pausing to create emphasis on his motivations. 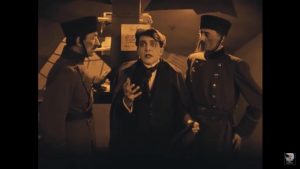 Additionally, Dr Caligari uses long takes on multiple occasions. This encapsulates the eerie atmosphere of the film. (29.49) The use of a long take highlights the dramatic expression of the female character, ensuring emphasis on her expression. Moreover, through the use of distinct toning and setting change, the audience are taken on a journey through the obscure backdrops utilised in the film. We see Wiene use a variety of transitions between shots, from the simple cut to a more interesting crossfade, indicating a tense moment in conversation between the two characters on screen. 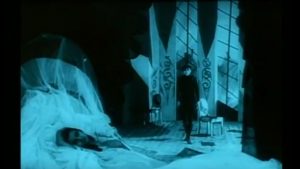 The editing also evidences the Expressionist movement through the use of unusual transitions, and interesting shots. This reinforces the bizarre visual style of the film, for example, multiple times in the extract we see close ups, fade ins, and fade outs in iris shots, but not in perfect round circles. The iris shots are imperfect and distorted. Just like the intertitles or the set, the editing shows an Expressionist style which privileges creativity and imagination over a perfectly balanced and realistic image, although the lack of clean cuts can seem simple to modern audiences. 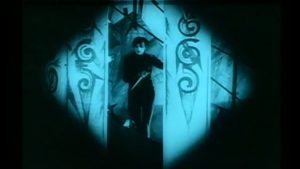 Makeup also played an important role in character portrayal during the Expressionist movement. Cesare’s exaggerated, gothic makeup and costume resembles that from theatre. For example, his messy, dark eye look contrasted with his white face creates an unusual figure that does not resemble reality. This coincides with the style of the set and blurs the lines of personification; the world is as alive as Cesare and he embodies the surrealistic concept.

In this way, and all the others previously mentioned, The Cabinet of Dr Caligari is typical of and exemplifies the Expressionist movement.