The Scene that we Chose :

From the movie Nosferatu, we decided to focus on the boat scene. This scene is indeed very interesting in terms of lighting, acting and editing because it represents well the techniques of German expressionism of the 1920s.

The Reason for choosing this Scene:

We decided to work on this scene for several reasons. First of all, it marks a real turning point in the film. Nosferatu arrives in the city and with him, death. This scene is very expressionist, the comparison with the rats, Nosferatu’s exit from the coffin, the faces of the actors in the overplay.

This scene is very interesting because it relies a lot on the spectator. The extract is frightening but not violent: Nosferatu is a real threat to the whole crew, an allegory of death lurking around. But during his attack on the captain, nothing is shown on the screen. We do not see Nosferatu attacking him, the scene is suggested by a heading “The death ship had a new captain”. This leaves the viewer’s imagination free, everyone can make their own assumptions.

Some of the main features of ‘German Expressionism’ includes inter titles, set design, lighting (Tinting and Toning) and fast-paced editing.

The use of inter title in this scene is done to better understand the story and help it flow better. It states “The death ship had a new captain”, this is written on a scroll looking inter title with cursive handwriting. This inter title matches the scene by creating an eerie look. It uses the the classic ideal theme you would expect pirates to send messages in bottles in, back in the day. The message alludes to a lot, and we know from this one inter title that Nosferatu has taken control and is coming. 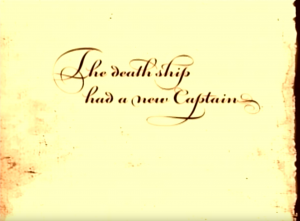 Moreover, in this scene, « the death ship », acting plays an important role in setting the atmosphere. Indeed, actors create tension in the way they move and emotions are expressed in an exaggerated way, in order to intensify the style of the film.

In terms of editing, back to back cuts in this small scene adds a faster-pace to the whole movie. For instance, when the worker starts to cut the box inside the ship, we cut to  a shot showing the rats coming out of the box. Then we get to a shot where he gets shocked and looks at something. Thus, we end up with a point of view shot, where Nosferatu comes out of the box. All this happens in less than 20 seconds of the movie, proving that it cuts straight to the point, instead of having lots of establishment shots. 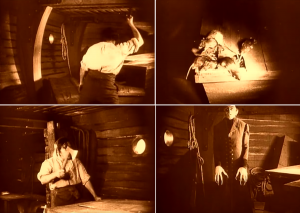 We can notice that the film is tinted, to make the spectator does not forget that Nosferatu is a vampire and that he cannot show himself in the light of day. However, it is impossible to shoot a black and white film scene at night, because nothing would have been seen on the screen. The possibility of tinting the film therefore makes it possible to film during the day and make the viewer understand that Nosferatu, without any life risk, takes control of the boat at night. Moreover, from the excerpt we have chosen, we can see that for the viewer’s understanding, Murnau tints the deck and cabin differently. The deck and exterior are in pink, and the cabin in brown.