For week 8 our group chose The British Cinema in the 1940’s, written by Charles Drazin and published in 1998. The book is a collection of essays written covering the directors, producers, and publishing companies in the 1940’s and offers insights into their films and careers. 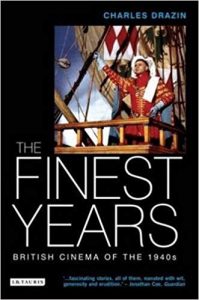 Cover of the book

Being written in the late 1990s for the benefit of modern audiences (be it academics or not who are interested in studying the period), this book is a critical study of a past era of British cinema. It is clear from the title that the author is expanding on the common view that the 1940s were the best years of British cinema. It was thus created to consolidate this view. The book deals with important figures of British cinema in the 1940s (directors, producers, etc.), giving each their own chapter. As such it aims to present the reader with biographical information, historical accounts and sympathetic views of those who, together, worked in British cinema at that period.

The book itself identifies and describes in various ways how cinema attendance hugely increased in the 1940’s, how it was used as a moral boosting tool by the government for both wounded soldiers and citizens of London and other cities during The Blitz as well as cinemas themselves as structures could provide some level of safety from the bombs as a lot of cinema screens were based underground. As far as this book can tell us cinema attendance soared during the war as civilians sought a way to escape from the horrors of the conflict, worries over loved ones fighting overseas and the ever present danger of the Luftwaffe. As far as the films being made during the war it ranged from public service films designed to keep the public safe to morale boosting films detailing victories for the RAF.  Although the ministry of information required films to go through a censorship screening to keep certain details a secret or to not tell the public potentially disheartening news. Ealing studios were a major player during the war as well as Gainsborough Pictures. Both production companies made melodramas as well as fiction feature films to entertain and amaze the public. The general public loved them so they could escape from reality for a couple hours at a time and be amazed by young British directors. For these reasons British cinema in the 40’s is often seen as a “Golden Age”. 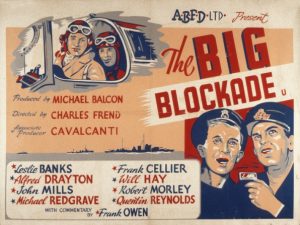 Advertisement for “The Big Blockade” a Ealing Studios production

One of the most noticeable problems with this source when analysing it through a 21st century perspective is the exclusion of female media creators. The 18 directors, producers and sound designers featured in the book are notable male, this is clearly a reflection of the time the book was written about, when female achievements where so often cut out of the documentation of history. Even though the book was published in the late 20th century it skips over many pioneering female creatives, this is detrimental as it doesn’t generate a full picture of the film environment at the time. If the book just focused on the mainstream big-name directors and producers, then the exclusion of women would be more understandable, but it specifically integrates the lesser known film makers with the familiar. Therefore, the book misses out on trailblazers like Ruby Grierson, Jill Craigie, Margret Thomson and many more. Because of the absence of these women there is only limited understanding of the atmosphere and impact cinema in the 1940s had at the time and today.