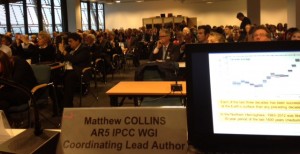 On 15 November, Prof Carol Smart, a co-director of the Morgan Centre for the Study of Relationships and Personal Life gave a talk as part of Exeter’s Humanities and Social Sciences open lecture series. Staff, students, and interested others gathered to hear Carol talk about her work on donor conception in contemporary family life, including Research Fellow Dr Joe Sweetman…

Carol’s work on the Relative Strangers project (with co-investigator Dr Petra Nordqvist) provided the basis of her talk. Over the last 20 years more than 35,000 children have been born in the UK through donor conception (via the donation of sperm or ova) and increasing access to new reproductive technologies means that families with children conceived through donor conception are set to become more common.

The Relative Strangers project explored what it means to have a child born through donor conception. Carol described some of the findings from interviews conducted with 44 couples (22 lesbian and 22 heterosexual parents) that conceived using a donor and 30 grandparents of donor-conceived children. With an array of data on family experiences, she focused on two themes:

Carol found that although parents (and less so grandparents) were usually in favour of being open about the genetic origins of donor-conceived children, they found that telling children and others was fraught with difficulties. For example, parents struggled with figuring out just how and when to tell people.

Notions of genetic relatedness played a central role in families’ experiences. For some, donor conception was “better” than adoption because of the genetic-relatedness of “at least” one parent. For others, engagement with (often fuzzy) notions of genetics led them to affirm the importance of parenting as doing – highlighting how nurture (rather than nature) led to the process of building the child into one of the family.

There were differences between the experiences of lesbian and heterosexual couples, with the latter’s decision to use donor conception often being taken in the shadow of infertility problems.

Throughout the talk Carol used powerful quotes from families that demonstrated the human significance of these donor-related issues. To end, she shared a moving quote that highlighted some of the other difficulties faced by couples. It detailed the dilemma faced by a heterosexual couple where the male was in favour of using his brother’s sperm, rather than a stranger’s, while his partner was not.

Carol asked the audience whether they should use a stranger’s or the brother’s sperm and, for a moment at least, we all appreciated the difficulty inherent in donor conception and the need to support families going through it.

The University of Exeter’s Dr Betina Winkler presented her research at the Daphne Jackson Trust research conference after she ended a career break wth the help of a fellowship from the Trust. Betina told us more…

This was the second research conference the Daphne Jackson trust organised and it was a great success. It took place at the Royal Society, London on October 25 and provided a great opportunity for the fellows to present their research.

The trust currently supports 42 fellows and most of them took part on the conference. Many universities and sponsoring organisations were also present.

The research presented encompassed a wide variety of disciplines and the quality was amazing. The prize for the best poster was won by Dr Tamsin Majerus of Nottingham University for her study on ‘Comparative genomics of colour-pattern variation in the two-spot and ten-spot ladybirds, Adalia bipunctata and Adalia decempunctata’.

The prize for best oral presentation went for Dr M. Maskey of Newcastle University for her presentation on ‘Using virtual reality environments to reduce anxiety in young people with autism’.

I gave an oral presentation on my research on ‘Habitat characteristics and the incidence of bovine tuberculosis in cattle’. The response was very positive and attracted a lot of interest.

The conference always provides a great opportunity for the fellows to meet and exchange their experiences. There was a time allocated for networking and looking at the poster session.

It is inspiring to meet so many talented researchers  working hard to restart their careers after a break.