As part of the University of Exeter International Women’s Day Seminar Series Professor Manuela Barreto spoke on how subtle sexism promotes gender inequalities. Helena Mattingley, Women in HE Project Officer, was there…

Professor Barreto shared her research to an audience of staff, students and members of the public. In a fascinating and fast-paced talk, she challenged her audience to think differently about sexism – showing a need for us to distinguish between blatant and subtle sexism.

Manuela showed persuasive evidence that ‘old fashioned’ sexism has been superseded by contemporary forms of discrimination. It is not that sexism has gone, but rather overt sexism has been driven underground and morphed into more subtle forms. Her question was: What consequences does this have for how women experience sexism?

Manuela explained that subtle sexism (unlike blatant sexism) does not lead to protest and anger from the target, but rather threatens that individual’s identity and sense of competence. This leads to poor performance and lower self-esteem, and can confirm gender stereotypes. The important distinction is that subtle sexism is ambiguous, difficult to challenge and leads to the target feeling flawed. Blatant discrimination often leads to anger, protest and in-group solidarity. 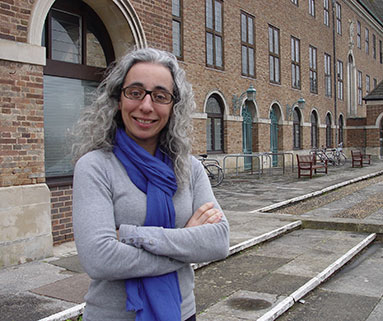 After explaining her collaborative experimental work with Professor Naomi Ellemers from Leiden University, Manuela talked on the moderating factors which lead to targets experiencing discrimination differently, such as self-esteem, and whether sexism was considered pervasive or rare, which would impact on future expectation of sexism. Many studies and examples were used to illustrate her influential research in this area.

Professor Barreto explained that subtle sexism can be made blatant by another person identifying the situation as discriminatory. Interestingly, research shows that whether this is identified as sexist by a women or a man affects the target’s perception. Her research suggests that this raised awareness of sexism only had positive effects when the source of the suggestion was male, highlighting the importance of men supporting gender initiatives.

After a question and answer session, where Manuela further elaborated on stereotype threats, unconscious bias and discrimination to minorities, the audience left with a new perspective on sexism.

The message I took away was that any form of sexism is not subtle in itself, but only while it is not publicly exposed and defined as discrimination. This means that to continue in gender equality we need to identify subtle sexism, make it blatant, and be able to protest against the discrimination.

Manuela Barreto is a Professor of Social and Organisational Psychology at the University of Exeter. She leads on the Societal and Lifestyle Shifts research theme and is part of the University Athena SWAN Working Group. Manuela’s research focuses on the impact of prejudice and discrimination on its targets, on perpetrators, and on interactions between the two. She also works on morality in intra- and inter- group relations. This research was funded by a prestigious grant from the Dutch Scientific Organisation.

This talk was the third of seven seminar talks celebrating a variety of gender research in the University. This seminar series showcases the diversity of research and links celebrations from International Women’s Day 2014 to next year’s events. Find out more about past and future events.

More information about Manuela’s work can be found on her website.