Michelle Ryan is Professor of Social and Organisational Psychology at the University of Exeter, whose research specialisms include a number of projects on women in the workplace. One recent talk made the TEDx top ten in its category internationally based on YoutTube views. Here, she talks about approaches that can make us all more successful in the workplace.

Women have made great advances in the workplace – seeing great success in particular professions, such as education, medicine, and the retail and service industries. But women continue to be significantly underrepresented in some sectors, such as science, the armed forces, surgery, particularly in senior management positions. My recent TEDx talk focussed on the reasons why women may continue to be underrepresented – is it simply about the preferences that women have for a better work-life balance, or do women still face subtle barriers that constrain the choices they make? This debate is one that interests many people, as we all face these choices in our daily lives, and indeed the TEDx talk has been viewed over 75,000 times. 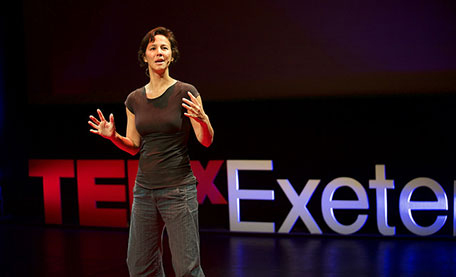 Many argue that women’s underrepresentation is because women have a greater need for work-life balance and thus choose to avoid the ambition, the hours of dedication, and the sacrifice required for success. I don’t want to question the decision of many women (and some men) to prioritise home over work, this is an important and valid decision. But our research suggests that there are complexities involved: Why might women not express ambition or be unwilling to make sacrifices? Is the pull of family stronger on women than it is on men? Or is there also something more complex going on?

Research conducted with university science students, members of the police force, and surgical trainees demonstrates that women start their studies or their careers just as ambitious as men. But this ambition erodes over time, so that within three years men express much greater ambition than their female colleagues.

Does the ticking of a woman’s biological clock cause ambition to wane? It seems not – our research demonstrates this drop at very different stages in women’s lives: students in their late teens, police trainees in their mid 20s, surgical trainees in their mid thirties. This says something more systematic about spending time in a rather male environment: the science laboratory, the police force, or the operating theatre.

Instead, our findings show that women’s drop in ambition directly follows from their increased awareness that they are very different from those that have made it before them (male scientists, male police officers, male surgeons). And who can blame them, why would you wish for something that is unlikely to come true?

But what about the desire for work-life balance? Traditionally, this is perceived as all about time – how much one spends at work versus at home with family, with friends, engaging in hobbies. While time is important, what is equally important for work-life balance is how one feels about the workplace. Consider surgery –why are less than 10 per cent of surgical consultants women? Many argue that the long hours, night shifts, and being called out in the middle of the night make this an unattractive job for women – but what about nurses or midwives: long shifts, unsociable hours, and you don’t get much more unpredictable than mid-wifery.

Indeed, we have found that perceptions of work-life balance are just as much about feeling you belong in your organisation as the amount of time you spend there. Here, for both men and women, the extent that you feel similar to those who had been successful before you, the more you feel you have a good work-life balance – irrespective of the actual time you spend at work.

This can be explained in two ways – being similar to successful people reinforces your identity: who you must be in order to be successful at work is compatible with who you are at home: thus your home and work identities are balanced. Second, being similar to successful individuals facilitates greater expectations that you too can succeed, making you more willing to make sacrifices to get ahead. Thus, the sacrifices you make are balanced out with the expected benefits of success. Women are less likely to feel similar to successful others because of the dominance of men in positions of authority, and thus they might feel they have a poorer work-life balance than men and be less willing to make sacrifices for their careers.

We therefore have evidence that women’s choices are very much shaped by their workplace experiences, and in particular, by issues of identity and belonging. This has a number of implications. First, this is not just a women’s issue – anyone can feel that they don’t belong: this can be on the basis of race, class, sexuality, religion, or age. Thus we can help explain why many different groups are underrepresented in particular roles.

The research also has implications about what can be done. The majority of work-life balance initiatives focus on time: part-time working, flexible-working, working from home. These initiatives are all important and help everyone achieve a better time balance. But they may inadvertently exacerbate issues of identity and belonging – part-time workers are less likely to feel they belong and can succeed.

I believe we need alternative measures that address issues of identity and belonging. One approach is to send the message that all types of people can succeed – so that women (and people of colour, working-class individuals, etc) can imagine themselves in a role, imagine being successful in that role, so that we can all feel confident that our sacrifices will be worthwhile.