Physical Geography lecturer, Dr Kate Smith reflects on the 2010 eruption of Icelandic volcano Eyjafjallajökull, and the recent rumblings of its close neighbour Katla. 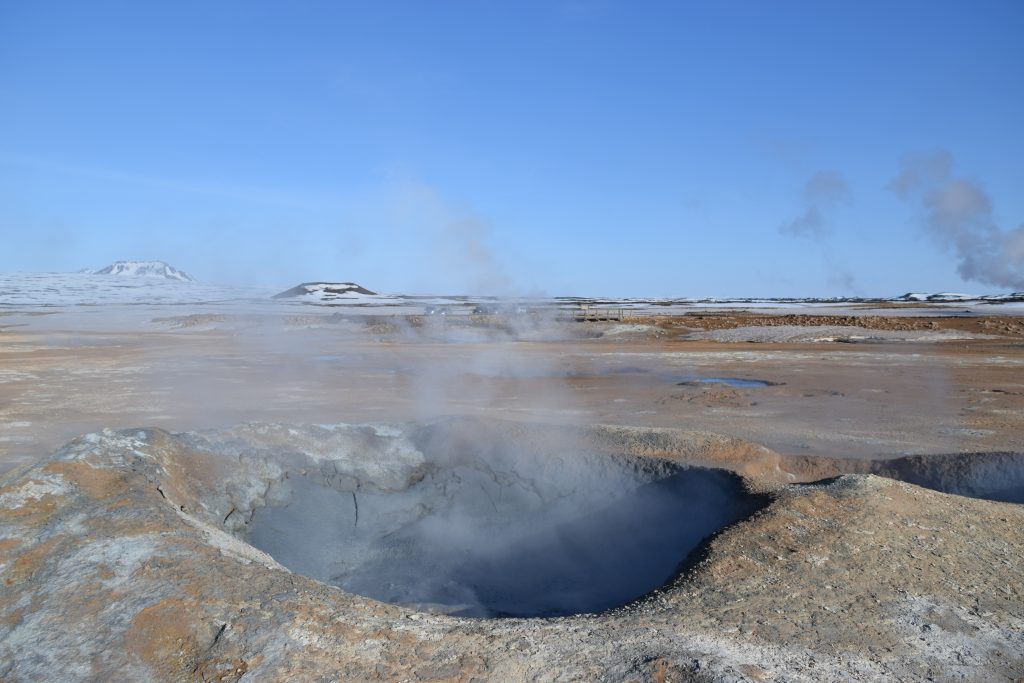 There have been rumblings in Iceland recently.

But given its position in the North Atlantic, this is perhaps no surprise. The location makes the country a notorious volcanic hot spot, regularly hit by seismic activity.

Two recent earthquakes in August 2016 have now led to international reports of imminent eruption risk of Katla volcano. They both occurred within the 9km by 14km central crater – or “caldera” – of the volcano in southern Iceland, and were the two largest earthquakes at the volcano since 1977.

So how worried should we be? Will there be a repeat of the chaos in the skies after an ash cloud drifted over Europe in 2010 caused by an eruption at Eyjafjallajökull, Katla’s close neighbour?

In historic terms, we’ve certainly been waiting for an explosive eruption of Katla, one of Iceland´s most active volcanoes, for quite some time. Lying beneath an icecap up to 700 metres thick, over the last 1,100 years explosive eruptions large enough to melt through the ice have occurred on average every 50 years. The last such eruption was in 1918, and the current pause of 98 years is the longest on record.

In the past earthquakes were felt two to 10 hours before Katla erupted through the ice. Since June, earthquake activity in the caldera has been elevated. The large earthquakes on August 29 marked the peak of this seismicity, followed by a series of more than 100 smaller events, finishing early on August 30.

Meanwhile, the rivers that drain from the ice-capped volcano have been smelling of rotten eggs. This smell comes from hydrogen sulphide (H2S), a volcanic gas found in fluids within the caldera beneath the ice. Unusually high H2S levels near Múlakvísl river have prompted official advice to avoid the immediate area. Changes in levels of volcanic gases around volcanoes and enhanced seismic activity can be signs of increased movement of magma and a future volcanic eruption.

So does all of this physical evidence point to an imminent eruption? Well, probably not. This activity is not actually unusual. Since the 1950s, periods of enhanced seismicity and increased gas pollution have not been followed by explosive eruptions, and there is no sign of swelling of the volcano or harmonic tremor (continuous rhythmic earthquakes) suggesting magma movement.

Earthquake activity at Katla also regularly increases in summer and autumn. As the summer progresses, more glacial ice melts, and small floods can occur. These larger volumes of melt water also increase pore pressure in the crustal rocks and can trigger earthquakes. Changes to water flow can also alter how much geothermal fluid is in the rivers, hence the smell.

In winter the melting reduces and water exists only in small pockets at the base of the ice, which reduces pore pressure in the crust and reduces seismic activity.

However, volcanoes can change rapidly and in unexpected ways. We can’t say for sure that Katla will not erupt in the near future. A 98-year repose period is long, and twice before eruptions of Katla have followed Eyjafjallajökull in the 1820s and in 1612.

So what would happen if Katla did erupt? Eruptions from this volcano over the last 120,000 years have been varied, but the most likely eruption would be from the central caldera. A very small eruption wouldn’t melt through the ice, but a larger one could melt through explosively. Explosive Katla eruptions typically involve ash clouds and large floods (jökulhlaups) of meltwater, ice and sediment that flow across the surrounding lowlands. Lava is not usually seen since most eruptions are subglacial.

A small explosive eruption from Katla is the most common eruption type and would last from days to a couple of weeks, produce a plume up to 14km high, ash fall in Iceland and a large flood, but would be unlikely to affect anywhere outside of Iceland.

A larger-scale event could last weeks or even months. In this case the plume would be up to 25km in height and could impact air quality and air travel in the UK and Europe within two days if the wind blows ash in that direction. Iceland could expect heavy ashfall, with implications for travel, agriculture and air quality, and a large flood. Such floods can have peak discharges (water flow rates) greater than the Amazon, and cause major landscape change and local tsunamis.

If there is an eruption, both Iceland and the UK should be well prepared. Evacuation plans exist for local communities and information is available in several languages. The UK Meteorological Office monitors ash in the atmosphere and is able to predict what areas could be affected.

When I began studying Katla in 1999 I was told she could erupt any time. This remains true today and with every day that passes, we get closer to an eruption. But I wouldn’t bet on it happening right now.

Icelandic and international scientists work hard to investigate Katla´s past and carry out 24-hour monitoring with sophisticated equipment to understand its present and future. We study volcanic ash, rocks, jökulhlaup deposits, river levels and gas emissions on the ground. Earthquakes and GPS records are analysed remotely and we use satellites and overflights to examine the ground and ice surfaces from the air. An eruption may not be imminent – but it is exciting that we can detect and interpret these clues to assess Katla’s next move.