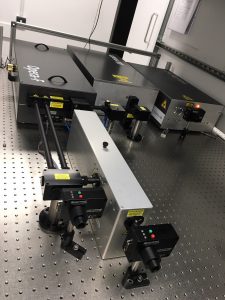 The Fidelity (right), Monaco (center), and Opera (left). In the foreground is the external signal compressor.

The Fidelity is a fiber laser with an output power of more than 10 W.  The Fidelity operates at a wavelength of 1040 nm, a repetition rate of 80 MHz, and generates pulses with 140 fs duration.  The Fidelity is currently being used to set up THz spectroscopy (for summer 2019) and THz imaging (to come later).

The Monaco is a 40 W, 1 MHz laser operating at 1035 nm with a 280 fs pulse duration.  The Monaco is used to pump the Opera-F OPA.  The Opera generated two beams, a signal (shorter wavelengths) and an idler (longer wavelengths).  The signal wavelength can be tuned from 650 nm to 900 nm.  The idler wavelength can be tuned from 1200 nm to 2600 nm.  After the compressors, the pulse duration is expected to be as short as 25 fs (signal) and 40 fs (idler).  The Opera output will also have a repetition rate of 1 MHz.  The combined signal and idler output power has been shown to be over 5 W across almost all available wavelengths. 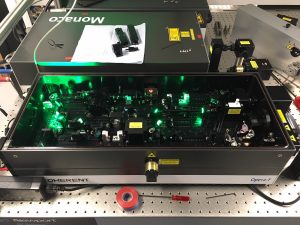 Inside the Opera cavity. The Opera is pumped by the second harmonic of the Monaco amplifier (green).

If the Opera is not required the full 40 W output of the Monaco may also be used.

The lasers are installed in a dedicated laser enclosure that is interlocked and separated from the EXTREMAG User Lab Spaces.  The laser enclosure optics will be configured so that all beams (Fidelity, Monaco, and Opera Signal and Idler) are available in the two user lab spaces of EXTREMAG: the so-called Free Space Lab B2, and the Microscopy Lab B3.

User Access to the beams will be via remote controlled shutters to the beam paths appropriate for the particular end station experiment.  The wavelength of the Opera Signal and Idler beams is completely computer controlled, and may be adjusted by users following training.

Beam paths will be enclosed where possible and all necessary laser safety infrastructure installed.  Laser protective eyewear for the particular wavelength(s) in use will be provided in addition to training related to laser safety and the local laser rules. 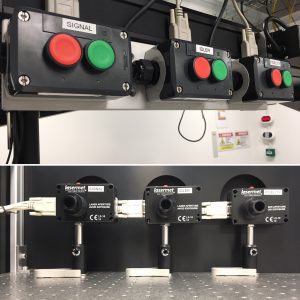