The study has been reported in four stages. 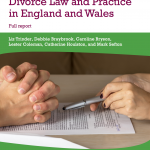 This report looks at how the law is operating and its effects. Interviews and focus groups revealed widespread gaming of the system as people used fault to avoid long waits for a divorce. Observations of judicial officers and case file analysis of undefended divorces showed how gaming was facilitated by de facto rubber-stamping of petitions. Whilst ensuring divorce is readily achievable, in effect ‘on demand’, interviews with parties and a national opinion survey revealed the disproportionate reliance upon fault created or exacerbated conflict, was unfair for those respondents subject to untested allegations and risked bringing the law into disrepute. The report recommends replacement of the current five facts with a six-month notification system, based on comparative analysis of other jurisdictions.   The Finding Fault report is available in full (pdf, 171 pages) or summary version (pdf, 12 pages). A full technical appendix (pdf, 40 pages) provides a detailed account of the methodology. An interim report on the early findings, published in March 2017 is also available (pdf, 2 pages) 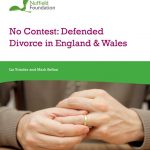 This report focuses on the 2% of cases where there is an intention to defend and the even smaller number of cases where a divorce is formally defended. Case file analysis of a national sample of defended cases showed that most defences were not principled defences of the marriage, but rather objections to fault allegations or a mechanism for coercive control. The report recommends that the ability to defend should be removed unless there was evidence of fraud or coercion, lack of jurisdiction or capacity. No Contest is available in full, with an integral executive summary (pdf, 88 pages). 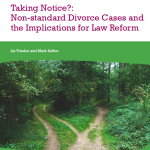 In Autumn 2018 the Ministry of Justice issued a consultation document, seeking views on a proposed notification divorce law and the removal of defence. Taking Notice reports on further analysis of the Finding Fault dataset to inform the MoJ consultation. It found that problems with service meant that any notification period should precede, not follow, decree nisi. It found that the scope for reconciliation is limited once a divorce is initiated. The 10% or so of divorces that are not completed is not due to reconciliation, but technical challenges with the process. It also analysed the 15% of five year’s separation cases, finding that these are typically a retrospective tidying up of legal matters, rather than cases where the respondent had opposed the divorce. Taking Notice is available in full (pdf, 30 pages).

Reforming the Ground for Divorce: Experiences from Other Jurisdictions (March 2019) 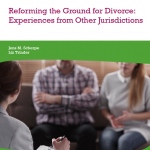 This report examined what lessons can be drawn from the experience of notification and/or separation-based divorce in other comparable jurisdictions. Eight jurisdictions are surveyed: Australia, California, Colorado, Finland, Germany, New Zealand, Spain and Sweden. A key finding was the identification of an international move towards autonomy and away from fault and defence, in line with the Ministry of Justice reform proposals. The report is available in full (pdf, 36 pages)