Here is the last in what we hope are a series of briefings for parliamentarians on the Divorce, Dissolution and Separation Bill. This  briefing summarises the research evidence for each of the amendments put down in relation to the divorce/dissolution process:

The conclusion is that none of the amendments are consistent with the research evidence.

With a little luck, and based on the overwhelming support for the Bill at Second Reading (and in the Lords before that), we might soon have a new divorce law that is fit for the 21st century and that would support families going through a difficult transition, rather than causing unnecessary conflict. 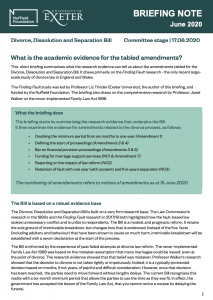