In our undergraduate second year module Public History Project, we were given the exciting opportunity to work with the Kresen Kernow archive of Cornwall to complete a project which helped us to develop our understanding of historical events and diversified our skills as historians. Our task was to transcribe fifty letters from the archive’s collection on First Marquis, Charles Cornwallis, from his time as the Governor General of India in the late eighteenth century. The project taught us both practical skills through our analysis of Cornwallis’ letters to his son, Charles Brome, and a better understanding of what contributes, affects and moulds Public History itself.

The core goal of the project was to transcribe and digitise Kresen Kernow’s physical documents. Through this, we learnt much about the key role that digitisation plays in preserving history. Digitalisation allows for sources to survive tests of time because digital documents are not affected by decomposition or fading and do not require the same scale of physical infrastructure for preservation. Even though digital documents do not give the same feeling of ‘connecting with the past’ that original sources do, by preserving their content, accuracy as well as reliability of historical memory can be ensured. The digitalisation of physical sources also increases their accessibility; in a society which relies more heavily upon the internet, having these documents present online allows for wider audience engagement to utilise Kresen Kernow’s collections. What is particularly admirable is that there is no paywall to limit access to their information so anyone can access Cornish history.

However, we soon identified a limitation to the practice of digitalisation in the amount of information that was being produced and the inability to select or edit this in fear of losing a record that could be of significance. We later discerned that the issue of profusion may eventually arise in regard to capacity but, as digitised documents require less upkeep than physical sources, they provide a less costly option for a field already struggling for funding. Profusion, even though it can become a contention when capacity is full, is a key way of identifying the diversity of documents as well as their individual importance which is not always evident on first appearance. Either for genealogical research, investigating Cornwallis as a military figure or identifying narratives that impacted eighteenth century India, digitalisation has shown us a progression within Public History bodies which is vital for the preservation of our past.

An element of the project which lingered throughout was Charles Cornwallis as an agent of colonialism. Cornwallis had been employed as Governor General of India and worked within the East India Trading Company, who at that time were assuming control over India and subjugating Indian resistance forces. Cornwallis led the campaign against Tipu Sultan, an accomplished Indian general, in the Third Anglo-Mysore War and described the Sultan to his son as a “restless and ambitious Tyrant”. Colonialism’s effects are tangible within global society today, recently seen in Britain when protestors in Bristol tore down the statue of slave trader Edward Colston. As historians, we believe that digitising Cornwallis’ personal letters can be of value to historical discourse for they provide rare insight into the perspective of one of Britain’s most prolific agents of colonialism. However, engaging with such sensitive material required us to remain impartial within our research and transcriptions, which, despite some concerns, will ultimately aid us in our understanding and study of history.

Throughout the process we developed transferrable skills which will aid us in both historical studies and the world beyond. Alongside skills in digitisation, the project compelled us to utilise research techniques with which we were either unfamiliar or unskilled. For example, we used family trees to develop our understanding of the Cornwallis’ family and its influence within British society, which was a first for us. The most important, and transferrable, skill the project taught us was how to collaborate remotely on projects by using the internet and technology. As the project took place during the COVID-19 pandemic we were unable to meet our sponsor or interact with the documents first hand, yet through the use of online meetings and scans of Cornwallis’ letters we were able to complete the project without much difficulty. In a world that is increasingly dependent upon the online sphere it was reassuring that practising history can survive and flourish digitally.

History, not just with a public oriented focus, is in an extremely exciting position to expand into digital spaces. This project, thanks to Kresen Kernow and the University of Exeter, has helped us develop our skills as historians in a first-hand manner. For those of you with an interest in Cornish history, we greatly recommend exploring the archives.

By Alice Lentern and Nick Watts 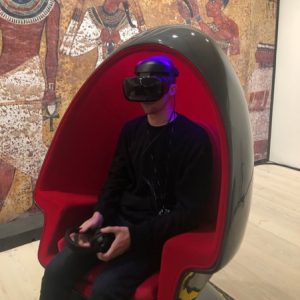