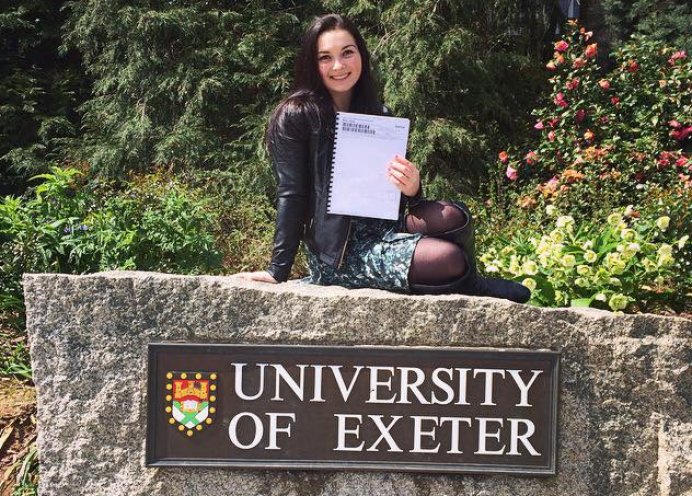 Stephanie Roberts, a current MA Theology and Religion student, talks about her experience of attending and presenting a paper at a recent PG conference, hosted by the University of Exeter’.

On Saturday 6 May, the 22nd Joint Postgraduate Conference on Theology and Religion was held at Exeter for the first time. With a total of 30 research papers presented, the day proved to be a fascinating exploration of the current research undertaken by MA and PhD students in the South West.

The presentations were split in to themes covering all things from ‘Belief and Practice in Antiquity’ to ‘Philosophy, Ethics and Revelation’. This is just some indication of the great diversity of papers explored during the day. The eclectic nature of this conference inspired a feeling of open-mindedness amongst the guests and speakers. This relaxed atmosphere, and the words of encouragement from my fellow postgraduate students, somewhat eased my nerves of presenting a paper for the first time later in the day.

For my part, I was curious to learn more about the areas of theology that some speakers had chosen to dedicate three years of their lives to, and yet had never crossed my path of study. I found throughout education that many students (including myself at times!) have a ‘but will this be in the exam?’ approach to learning, unwilling to clutter their minds with information that will not increase their final percentage. It was refreshing to be involved in a day where the audience were enthusiastic to widen their view of theology and engage in these new areas of study that are, no doubt, often outside their own chosen sub-discipline.

Following the coffee break, it was time for me to give my first presentation at an academic conference, with a paper entitled ‘Judas Superstar? A reflection on the relationship between Jesus and Judas in Jesus Christ Superstar’. Despite my apprehension as a fresh-faced MA student addressing an audience who, generally, had much more experience of academic conferences, I was relieved that the questions were less intimidating than I had feared!

As far as academic papers go, I have found this one particularly enjoyable to present as the inclusion of movie clips and rock-ballads naturally accompany my analysis and the sight of audience heads bobbing along to Judas’ solos made me feel more at ease throughout the presentation. It seems the perfect way to have introduced myself to this academic rite of passage.

One paper I found particularly thought- provoking was by Amna Nazir, a PhD student of Law and Theology with cross-institutional supervision from Birmingham City University and the University of Birmingham. She demonstrated the necessity of interdisciplinary study in her paper, ‘The Death Penalty in Islam: A Religious Necessity?’. Having never studied Islam, this is a topic I knew very little about but I was intrigued by the provocative title.

Nazir explored the death penalty in Sharia law and international law and argued that, until there is absolute justice in the courts and governments of these countries, the death penalty cannot be right. Nazir explained that court cases’ reports are often restricted and so it is impossible to know whether countries have properly adhered to both Sharia and international laws. Furthermore, the great variance of its practice across Islamic countries is indicative of the fact there is a lack of consensus even within the faith about when the death penalty is to be evoked.

I found the paper incredibly interesting to listen to and the discussion that followed was just as rich. It became clear that there are a small number of Muslim voices supporting this view and, where westerners attempt to enforce their views against it, their criticism is merely met with disdain or suspicion by Islamic countries. Ultimately, if the application of the death penalty in Islam is to change in any way, the impetus must come from within the religion.

It was exciting for me to be involved with such a packed day of research papers and, in my view, the conference aptly demonstrated the active interest present in the theology’s many manifestations. The post-graduate community highlighted their willingness to engage in interdisciplinary study and to recognise the impact religious studies can have in a modern context.