Ting-Shan Lin, a current MA Translation student from Taiwan, talks about her experience travelling across Europe over the Christmas holiday.

This was my very first backpacking experience to Europe in my life, needless to say how excited I was, especially as the trip was during the Christmas holiday. We went to Berlin, Prague, Vienna, Salzburg and Munich. Every place has its own beauty and attractive part, but there was one thing you could never miss during this season– the Christmas market. Basically we came across at least one Christmas market every day in each different city, even without planning. 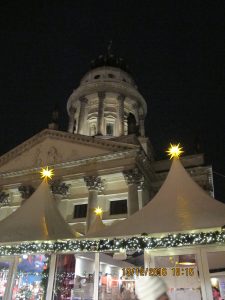 Germany has the oldest Christmas market tradition in the world, so I was really excited about every visit and enjoying the Christmas vibes there. Of course, we didn’t miss the hot mulled wine, which was really comforting and warming especially after a long walk in such cold weather. But what made me crazy about the Christmas market was the various mugs that we could keep if we really fancied the design. It was quite an adventure for mug hunting. Every time we wandered around a Christmas market, I couldn’t help but check the mug that they served their wine in. 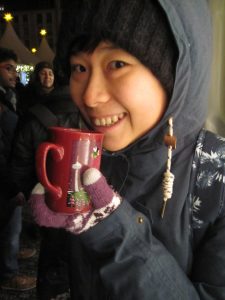 Enjoying a tipple at Gendarmenmarkt

This was the very first mug I got in a Christmas market, called ‘Gendarmenmarkt’ in German, which is really famous for its white roof stalls. Actually, it was the only one that we had to pay an entrance fee (¢1) for, but I really enjoyed the atmosphere there. There was a stage area where crowds gathered for some performances and there was a big indoor market selling a variety of goods from Christmas cards to decorating ornaments. 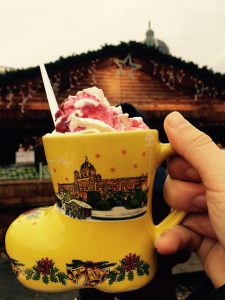 This shoe-shaped yellow mug is my favourite collection from Vienna’s Christmas market. I still remembered that morning we saw so many people walking around holding it when we were admiring the grand buildings around Hofburg. We started to check every stall for the mug and forgot why we were there initially. Luckily we found it at last, and yes, I tried a different drink which was lovely and the whipped cream not only made it taste better, but also made the mug look even cuter.

Berlin – a collision of modern and history

Berlin is an interesting city in my opinion. At the first glance, the city has an array of grand modern buildings, and streets are tidy and organised. A special building that we visited during our stay was the Reichstag building. It’s designed as a green building utilising renewable energy technology due to a fire incident in 1933. We booked a free tour, including a brief introduction about the building and an audio-guided tour to the top of the arch. I was amazed by the audio guide because when we started to walk into the circular pathway leading to the top of the arch, the audio guide just spoke automatically and introduced what we could see at the spot we were. We didn’t have to bother working out which button to press or which channel to choose. During this tour, I not only enjoyed the scenery but also learned more about the city. 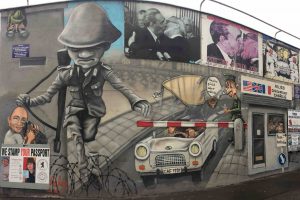 Compared to the tidiness of the western part of Berlin, the east had a totally different atmosphere and a street scene with countless graffiti. Walking along the ruins of the Berlin Wall, it gave me an illusion of travelling back in time, as if the West and the East were still controlled by two different parties. Some of the graffiti along the wall depicted the historical incident, others may convey the atmosphere of uncertainty during the split period. It’s a great place for tourists who want to have a taste of history and a different vibe away from modern Berlin.

After a four-day stay in Berlin, I found it’s a city combining modern elements, but still preserving its historical characteristic of the Second World War. I love the advanced part of the city as well as the slightly messy side.

It was really close to Christmas when we travelled back to Munich, Germany. Actually, we planned to go to a world famous Christmas market in Nuremberg during our stay in Munich. However, we forgot to book train tickets and the last minute deal was literally robbery! Moreover, we were all exhausted at this point- the twelfth day of our journey- so we decided to go easy with the last four days. 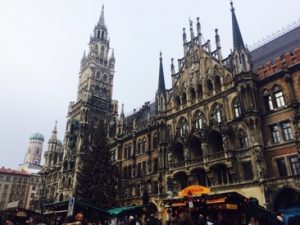 We visited our last Christmas Market in front of the old city hall on the 24th December. I found the day of Christmas Eve was quite similar to Chinese New Year’s Eve. Most of the stores were closed by around three in the afternoon to prepare for the night with family. Instead of a Christmas feast in a restaurant, we had a Chinese style dinner to celebrate the night for reunion. We bought some ingredients from a Chinese market for hot pot, which is a tradition in my family for Chinese New Year’s Eve, to celebrate this special Christmas Eve in Munich. After so much gourmet food in local restaurants, this was a special meal to me during the trip. I think I’ll always remember this special Christmas Eve, sharing hot pot with friends in a foreign city. 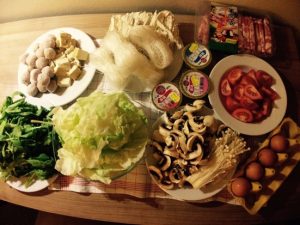 After the comforting meal, we joined a Mass in a local church, which was recommended by a lovely receptionist at our hotel. I am not religious but I was quite interested in the ritual held in church on Christmas Eve. When we arrived in the church, the event had already started. I was a bit surprised by the number of people participating and the chorus, with the Organ accompaniment, echoing around the grand church was astonishing. It was a peaceful moment and I even closed my eyes and started to remember my year of 2016. It was a time for appreciation and reflection. 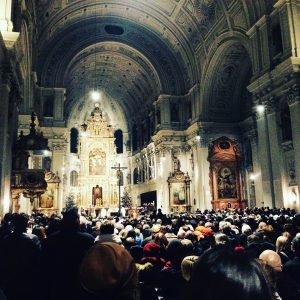 Out of all the cities I visited during this trip, Prague is my favourite one, although we didn’t have a good impression at first. The time we arrived at Prague was quite late at night. The first problem we encountered was that we didn’t have the proper currency we needed and secondly I was totally unfamiliar with the language they use (I learned German for two terms during undergraduate studies: although I am only at basic level, I can read and listen to some key words). It was quite a messy night, especially when we arrived at our hotel around 10 pm. It seemed like a private accommodation and we couldn’t find how to get in there. After confirming the address with a coffee shop nearby and getting inside the building, we also found the e-mail the house owner sent us, which included the room number and password of our room. Actually, it was our mistake for not paying attention to the detail of the check-in time. It was a novel experience that we didn’t even have to check in to get into a room. Although it seemed quite scary from the appearance of the building (built during the middle ages with some superstitious stories), it was a cosy apartment with a lovely attic. Much to our surprise, it turned out to be our favourite accommodation and we really felt at home there. 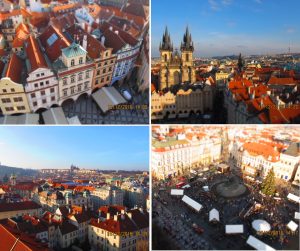 Compared to other cities, Prague has a lower commodity price and cheaper fees for transportation. It was a great tourist spot to explore on foot. We visited the area of Prague castle and Charles bridge, which was really magnificent. But the most memorable spot during my stay in Prague was the viewing platform at the top of the Astronomical Clock, which was breathtaking. I still remember it was a beautiful day with brilliant weather, but it was also quite windy and the air was still chilly. Although it was freezing and I could hardly feel my fingers, I still had the temptation to take pictures. It was a totally different angle but a marvellous spot to see the beautiful city underneath, which was like a vivid showcase of various building models with orange roofs shining under the sun. 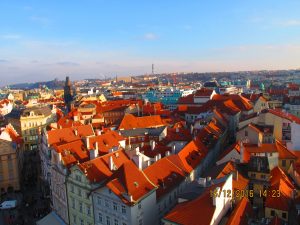 The colourful roofs of Prague

If the tour to other cities was an exploration of grand architectures, the trip to Salzburg was an adventure of the magnificent natural environment. We went to King’s Lake (Königssee), which is near the border of Austria but located in Germany. As the bus travelled through the mountainous area, a change of scenery caught our attention. Not only the site of the remote mountain’s tip covered in snow, but also the trees and extensive fields along the road. Since we come from a tropical area, it was not every day scenery for us. Needless to say, it was far colder than the places we’ve been for this trip so far. The white snow was shining under the sun, bright and spotless. 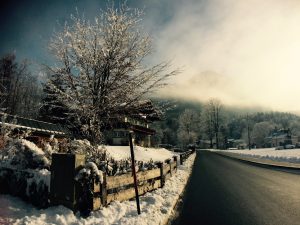 After a long ride, we finally got to our destination- King’s lake. It was quite misty. Although we couldn’t see anything during our cruise around the lake due to the fog, the view was still spectacular. It was windless and the lake seemed so calm and sparkly. The tour guide also played his trumpet in the middle of the lake to show us the clear echo through the mountains. In the end, he joked that he also had to pay for his cousin who played the melody back in the mountain. It was an enjoyable cruise and I gave a double tip. 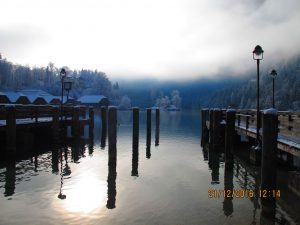 It was the 12th day of my trip to Europe. It was also the last day in Salzburg. After nearly two week’s trip with friends, I decided to leave a day for myself. Actually, I had no plan at all, but I was so excited that I could explore the city on my own. Walking along the street from my hotel to the city centre, trees were covered in snow and shining under the sun. It was a bright day but the air was still freezing.

Without a map, I just roamed around the streets. Then, a market popped up after I turned into a busy street. I was surprised and excited because I love exploring local markets wherever I go. There were many stalls and food trucks with a variety of food and daily commodities. I was like a child who went into a candy shop where everything was so novel and attractive. I can’t help roaming around and trying to find out what they were selling. I tasted some food samples like cheeses and sausages. It was like an adventure, even though it might be just daily life for the local people. After 30 mins wandering, I stopped by a food truck which was selling fried chicken. When I was ordering, the salesman asked where I came from. I said Taiwan, and to my surprise, he replied ‘oh, Formosa.’ It was really delightful to find out people from a foreign country know my hometown. The conversation was short, but it really made my day. As I stood around a table and had my meal like the other locals, it gave me the illusion that I was a part of them. It was one of my most memorable mornings of the whole trip.