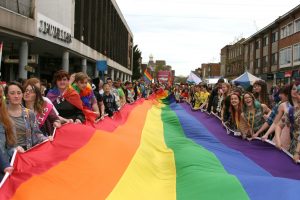 The first Exeter Pride was held on February 28, 2009, and the event has been held annually in Exeter ever since. With plans currently being made for the ninth Exeter Pride on Saturday, May 13, 2017, we asked the longest-serving Exeter Pride Trustee, Alan Quick, a few questions.

How did you first get involved in Exeter Pride?

“Some years ago I was becoming increasingly concerned about some of the decisions and opinions of the then Bishop of Exeter who was not being very supportive of lesbian, gay, bisexual or trans (LGBT) people’s rights. After discussion with friends at Intercom, the South West LGBT support forum and charity, we all made the decision that a Pride event for Exeter would be a good idea. Intercom ran it for the first two years and I chaired the organising committee for the following three years. I have been involved in every one and today I remain as one of the trustees which help to organise it.”

When was it started – and why?

“Collectively we believed that an annual Pride event would show that there are LGBT people in the community and that it would be a chance to celebrate the contributions LGBT people make to society and also put on some fun events as well offer a chance for serious debate about issues. After a lot of planning and work by just a very small group of people, the first Exeter Pride was held at Exeter Phoenix and Exeter Central Library as Exeter LGBT History Pride on February 28, 2009.”

What is its aim?

“Exeter Pride is now an annual event and held as a celebration of the LGBT communities and diversity within Exeter and the surrounding regions.”

You’re now preparing for the ninth Pride – what is the secret of its success?

“The success is down to the hard work of many trustees, volunteers and support received in previous years and now the small band of trustees who all take on different roles, a committee of supporters and more than 50 volunteers. It would not happen without all these people who offer time and commitment free-of-charge. It is just great that people want to help and we cannot thank them enough. We all contribute in different ways and it all comes together to help put on a fantastic event.”

How long does Pride take to organise and how many people are involved?

“It really does take a lot of planning and organisation. Committee meetings are held monthly all year round but there are also many sub groups and committees for various aspects such as the parade, workshops, entertainment, fundraising, volunteers, etc. Fundraising events are held throughout the year and there is a great social side which helps bring people together. Currently there are just nine trustees. The main committee sees about 12-15 people attend each month, some people just help with sub groups and committees and the 50+ volunteers may just help on the day or be committee members.”

What is the best thing about it?

“Pride day, which is free-of-charge and family-friendly, consists of many events and activities including a parade, workshops, ceilidh, drumming circle, family events, youth events, talks, a panel debate and a health zone. There is also a marketplace of stalls with lots of information, rounded off with an evening of entertainment. On May 13, 2017 the parade will start at noon at the St Sidwell Centre and make its way down Exeter High Street and into Queen Street ending at Northernhay Gardens and Rougemont Gardens, where many events will take place, many also taking place in Exeter Phoenix and Exeter Library.

“I think the best thing is that it brings the community together and is helpful to so many people, either by providing them with information or enabling them to meet like-minded people.”

How has the day changed over the years, and how would you like to see it develop?

“Exeter Pride has grown incredibly since the very first one. It now attracts about 2,000 people in the parade and will this year include roller skaters, a fire engine, Samba band, Morris dancers, representatives of groups and organisations from across the county and not forgetting, our infamous 50m rainbow flag, which takes lots of people to carry! It would be great to see Exeter Pride grow to the size of other larger city pride events where there is an outdoor main stage with acts and more people attending. Saying this, Exeter Pride is growing year-on-year and it is one of very few pride events which is free. It brings a huge economic benefit to the city and really puts the city on the map.”

How is it financed?

“It costs more than £14,000 a year to put on and it would not be possible with our partners and sponsors and those who support it. Principal supporters last year included Devon County Council, The University of Exeter, The University of Exeter Students’ Guild, Exeter City Council, Bill’s Restaurant of Exeter, Devon and Cornwall Police, Devon and Somerset Fire and Rescue Services, EDF Energy, Somerset College, Nandos, Patronus Security and Vaults Bar and Club. Support has also come from many other businesses and organisations. Exeter Pride is a registered charity.”

Why should people support it?

“As I said, Exeter Pride is a celebration of the LGBT communities and diversity within Exeter and the surrounding regions. It is about raising awareness, education, having fun and getting together but also about discussing some serious issues in the panel debate or finding out information in the health zone. It is a constant battle fighting homophobia, biphobia and transphobia and events like Exeter Pride help to do their bit. I think the constant battle for equality and diversity is one you cannot give up on and I would say to all, come along to Exeter Pride to find out for yourself.”

What are you most proud of about the day?

“I am surprised and really pleased how it has grown into such a huge event. I am proud of how everyone has pulled together to make it happen and proud to have played a small part. A few years ago the police said the day gave one LGBT person the confidence to speak up about some issues and said if nothing else, Exeter Pride helped that young person to speak out and resolve those issues. Exeter is such a great city and it is tremendous that Exeter Pride is an integral part of it, firmly on the map of events that take place each year.”

Find out more about this year’s Pride event on the Exeter Pride website.

Equality and diversity campaigner Alan Quick was recognised by Intercom Lynx South West in 2006 for his work in opposing homophobia in the South West of England. He was involved, from the beginning with Intercom and other volunteers in establishing Exeter Pride. It has become the county’s biggest and free annual LGBT Pride event.

In recent years Alan has contributed to or helped write some national equality documents and educational material. He has been a DJ, including on the gay scene, for more than 35 years and is currently a resident DJ at Vaults in Exeter and Soho in Torquay. Formerly he promoted the South West’s biggest gay club night, Boxes on Tuesday, in Exeter, which supported a number of lesbian, gay, bisexual and transgender (LGBT) charities and organisations.

Alan is actively involved in campaigns against inequalities in football nationally and, locally, is a member of Exeter City Football Club’s One Game One Community Group. He is a supporter of Devon Lions Football Club, Kick It Out and he has contributed to two books about his late footballer friend, Justin Fashanu. He is South West of England Co-ordinator for Football v Homophobia and is also a member of Devon FA Inclusion Advisory Group. Alan is a trustee with both Devon Communities Together and Local Heroes, an anti-bullying and anti-discrimination charity. He is also the editor of a Devon weekly newspaper.