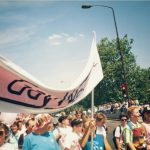 Robert Howes will speak to us on Sunday about LGBT issues in Bristol.

was born and brought up in Bristol.  He has been a committee member of the Campaign for Homosexual Equality (CHE) Westminster group, a volunteer with London Friend and a member of Gay West since 1983.  As a historian, he has published a book on the LGBT+ history of Bristol and Bath and a number of articles on the LGBT+ press and literature of Brazil and Portugal, as well as articles on Brazilian and Portuguese history.

Robert’s talk will be based mainly on the history of the Gay West group (1982 to present) and its two predecessors, CHE Bristol (1970-1983) and Bath Gay Awareness Group (1971-1982), which form one of Britain’s longest running LGBT+ institutions.  It discusses the varying activities of the groups and their members, ranging from political campaigns to social activities and personal support for members, showing how these activities have varied over time.  It is structured around the concepts of civil society and the public sphere, arguing that the partial decriminalisation of male homosexuality in 1967 gave more freedom for activists to explore different ways of getting LGBT+ issues onto the agenda of public political debate.

The way in which this aided greater recognition of the human rights of LGBT+ people can be better understood by comparing the position of LGBT+ people in Britain before 1967 with the situation in authoritarian dictatorships such as Brazil in the 1970s.  By drawing parallels with the role of social movements in facilitating the transition from dictatorship to democracy, I aim to show how the varied activities of LGBT+ organisations helped promote greater acceptance of sexual diversity in the UK after 1967.