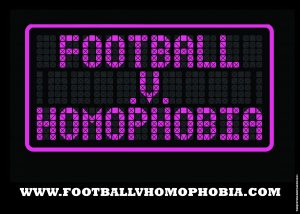 Ticket information can be found on the Exeter City F.C. website.

Exeter City Football Club will be taking a stand against homophobia in football at its home game with Stevenage on February 18.

The match has been designated as the Club’s annual ‘Football v Homophobia’ fixture – a move welcomed by the Exeter City Supporters’ Trust and its One Game One Community (OGOC) Group. The OGOC Group, with support from Devon County Council, is organising a series of initiatives at the match working in partnership with the Devon Lions, the local gay friendly football club. Also supporting the anti-homophobia event will be volunteers from Exeter Pride and University of Exeter Student LGBTQ Society.

Alan said: “It is really positive to see Exeter City taking such a principled stance. Everyone, be they player, official, employee or fan, should be free to be themselves. Exeter City takes a firm stand against things like inappropriate chanting or hateful or prejudiced language which is to be congratulated”.

Exeter City’s One Game One Community Group is part of the national Kick it Out campaign which aims to address all types of discrimination in football including race, disability, gender, age and sexual orientation.

Volunteers who would like to help give out flyers etc and attend the game can contact Alan Quick on 07979 753571 or email: alan.quick1@btopenworld.com.