Did you know that as well as supporting research we also have a lending collection geared towards leisure and recreational reading? This is located in the Forum Library Lounge area, just at the entrance to the Library on level 0. The Library Lounge provides a more relaxed learning space with comfortable sofas and vending machines, so it’s a great place to take a break or to meet your course mates for informal study. 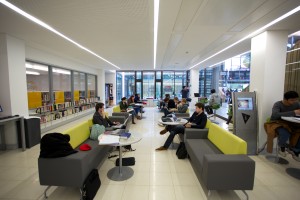 Students in the Library Lounge

The Library Lounge Lending Collection contains a growing array of books you can borrow. Content is selected by the Library team with the aim of covering a broad selection of interests and abilities including graded readers to help international students improve their language skills, genre-fiction bestsellers, and some of the novels shortlisted for literary awards like the Booker or Orange prizes.

So please feel free to borrow books from this collection – they can be issued in the normal way using self-issue machines. Not sure where to start? Don’t worry! Over the coming week Library staff will be sharing our top picks and recommendations from the Library Lounge collection on this blog – perhaps we will inspire you!

Set around the clash of civilisations as Europeans with their guns encounter Feudal Japan at its Bushido-wielding might. Clavell’s impeccable research and descriptive reading make this classic historical novel come to life. Revealed a lot about life, love and death in Japan at the time in the context of rival warlords determined to seek out any advantage they can in their quests to become Shogun. A great adventure with strong central characters and scene-setting on an epic scale.

Find it in the Library Lounge at classmark:  828.9/CLAV

A comic fantasy novel about Armageddon as predicted by the “Nice and Accurate Prophecies of Agnes   Nutter. Witch”.   A funny and philosophical novel with a wide range of characters including angels, demons, Witchfinders, a scatterbrained satanic nun, the four horsemen of the apocalypse and Adam (the antichrist). I would recommend this novel because it makes me laugh every time I read it. If you enjoy this book you may like to try Anansi Boys by Neil Gaiman or the Colour of Magic by Terry Pratchett. These books are also in the Library lounge collection.

Find it in the Library Lounge at classmark: 828.9 /PRA

Manja: a novel about five children by Anna Gmeyner

Set between the world wars in Germany, this tells the story of 5 children, from conception to early teens, focusing on their friendship and how this is ultimately changed forever by the differing political beliefs of their parents.

Anna Gmeyner was an Austrian exile, writing in London in 1938, so this story feels very authentic in its coverage of the rise of Nazism in Germany. The innocent friendships of the children make wonderful reading: it’s a satisfying book with a powerful message.

The Brief History of the Dead by Kevin Brockmeier

In this magical adventure novel people fall into three categories: the living, the long dead, and the people who are dead but still have living friends, families and former colleagues to keep their memory alive.  The City of the Dead is neither Heaven nor Hell, but it’s a place where souls can ‘live on’ at least until the last person to have known them passes over. The novel’s chapters alternate between the story of Laura Byrd struggling to survive in Antarctica and character-studies of those City inhabitants who once knew her. This book isn’t perfect but I could overlook the plot-holes because the polar survival parts (which riff on Apsley Cherry-Garrard’s real life classic, The Worst Journey in the World) are quite exciting and, above all, because the City of the Dead chapters are always tender, sometimes funny, and raise so many interesting questions about memory and the connections and experiences that make us who we are. Worth a read.

Set in 18th Century Paris, the story describes a young engineer’s task of destroying a crumbling church and relocating its thousand years worth of buried human remains. The cemetery is full to overflowing and the decaying of corpses buried there taints the Paris air for streets around. The bones are buried in pits in the graveyard, layers upon layers deep and the excavation work must be done by a team of men, by hand.

It’s possibly a slightly distasteful subject – the description was so vivid I could taste the decay in the air – but told in such a beautiful and real way that I was gripped and could not put it down. This was a book that I kept sloping off to my armchair to “just read a bit more” then coming round three hours later having done nothing but read, but not minding one bit because it was worth it.

Watch out for Parts 2 and 3 of our Library Lounge Top Picks coming later in the week…..