Home » News » A New Book on Demons and Illness

A New Book on Demons and Illness

Demons appear in all kinds of medieval sources, but often feature particularly in the records kept by saints’ shrines of miracles performed by the saint. Among many other illnesses and disabilities, medieval saints are said to have cured a number of unfortunate men and women who were thought to be ‘possessed’ or ‘vexed’ by demons.  In fact, the belief that demons could cause both physical and mental illnesses was not unique to medieval Europe. Medieval hagiographers often modelled their narratives of possession on the New Testament, and the idea can also be found in many other cultures, ancient and modern. 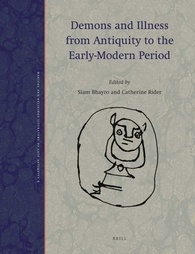 It was with this in mind that in 2013 I and a colleague in the Department of Theology and Religion who specialises in the ancient Near East and early Judaism, Siam Bhayro, organised a conference on Demons and Illness: Theory and Practice from Antiquity to the Early Modern Period. The conference proceedings have just been published by Brill, complete with a beautiful cover which shows the image of a demon found on a late antique magic bowl – artist’s impression by Dr Naama Vilozny.

Siam and I have long had a mutual interest in the history of magic and the supernatural, and while thinking about possible joint projects we lighted on the idea of looking comparatively at beliefs relating to demons and illness. There have been many studies of demonic illnesses, possession, and related topics in particular cultures – many of them excellent – but there is much less research that looks comparatively across time or space.  Siam and I thought there was a lot of potential here because beliefs relating to demons and illness could be found very widely in the ancient and late antique Near East, and those beliefs in turn had an influence on Jews, Christians and Muslims.

The conference, part funded by Exeter’s Centre for Medical History, brought together scholars from eleven different countries. Their papers ranged from ancient Egypt and Mesopotamia to seventeenth-century England and we have kept this wide chronological and geographical range in the book.  We had several papers on the Middle Ages, which looked at a variety of sources including hagiography, medicine and magical texts.

The conference papers raised many different issues and highlighted the wide range of source material available. Not surprisingly they covered a huge range of beliefs, prompting us to question how far, say, Mesopotamian demons who caused fevers were really comparable with the demons of medieval and early modern Christianity.  Nevertheless, some themes kept coming up.  Many papers looked at how the belief that demons could make people ill interacted with other understandings of illness, particuarly with the equally widespread and ancient idea that diseases had identifiable physical causes. How far did the sources distinguish between demonic and non-demonic causes of illness? For example, as Claire Trenery and Anne Bailey point out in the book, medieval miracle accounts often distinguished quite carefully between ‘madness’ and ‘possession’ – not all cases of mental illness were put down to demons.  Another theme that many of the papers discussed was healing.  Who could cure demonic illnesses, and how?  Were religious solutions – such as appealing to God, the gods, or a saint – viewed as the most effective?  What role did medicine play?  Where did the boundary lie between medical and magical cures?

There is scope for plenty more work on this and other questions. We hope that the book will be the start of an ongoing conversation.

← Arabic in the Archives: Keeping Up with the Canons of Medieval Toledo Anne Lawrence-Mathers on Medieval Magic, Part I →