The annual International Medieval Congress hosted by the University of Leeds in July (and known affectionately as the ‘IMC’ or ‘Leeds’) is the highlight of the European medieval calendar – and this year saw a particularly large number of Exonian intellectual pilgrims make the journey north.

The theme of the 2017 congress was ‘Otherness’, which meant that what tends to be a rather historical gathering took on a more literary tone (be that good or bad, depending on your perspective). Medievalists certainly took the theme to heart – the word ‘other’ could be found on session or paper titles on almost every page of the programme. However, while inspiring a wide variety of takes on the topic, it proved less conducive for amusing paper titles (and meant my slightly risqué effort got more attention than expected). 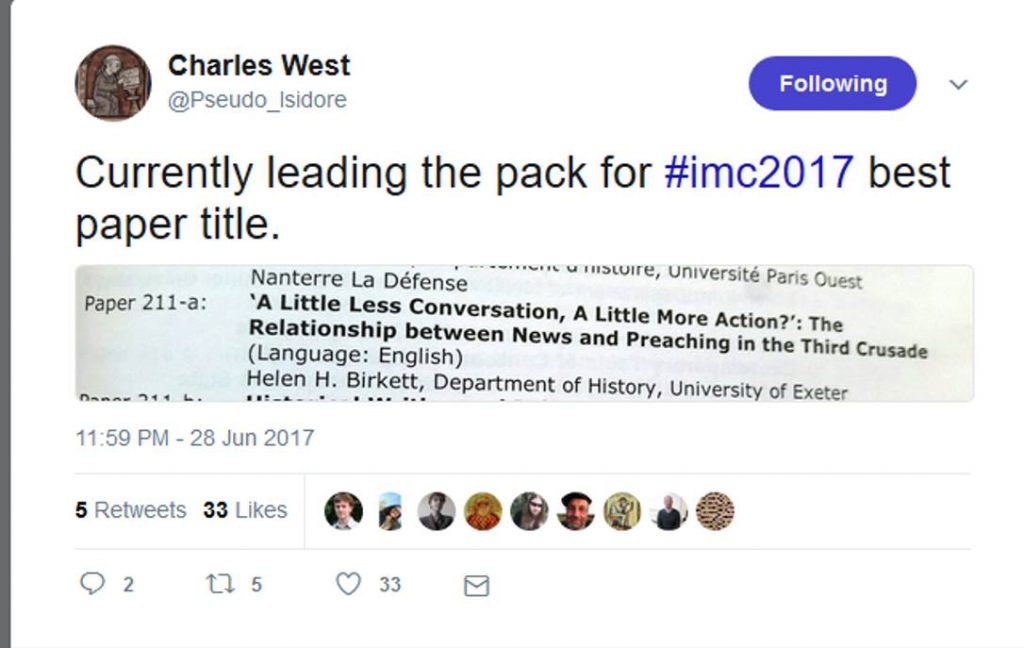 Fortunately, other members of Exeter’s Centre for Medieval Studies made their mark in less frivolous ways. The elusive James Clark helped to kick off proceedings with a paper in the very first session, while his PhD student, Henry Marsh, was among those presenting towards the end of the conference on Thursday. Other speakers from our extended PhD community included Lorena Fierro-Diaz, Edward Mills, Eddie Proctor, Lenneke van Raaij, Teresa Witcombe, Tabitha Stanmore, and Ryan Kemp. Among the staff, Richard Flower, John Wilkins and Sharon Marshall carried the banner for Late Antiquity and Classics, while I represented History and the High Middle Ages. In addition, Philip Schwyzer and Naomi Howell hosted two sessions drawn from their new HERA project, ‘Deploying the Dead: Artefacts and Human Bodies in Socio-Cultural Transformations‘.

Stealth participants (attendees not listed on the programme) included PhD student Imogene Dudley, Sarah Hamilton, and our man of the moment, Levi Roach, who received a number of hearty congratulations for receiving the Longman/History Today book prize last week. Both staff members also took the opportunity to hold supervisions in person with PhD students who are usually absent from Exeter due either to their status as DTP-award holders or employment through international research projects. Alongside current members of the Centre, a number of former Exonians were also present: Prof. Julia Crick, Drs Daniel Roach and Matt Mesley, and Kieran Ball, an undergraduate at Exeter and now a DPhil student in Oxford.

Meeting up with old colleagues and friends, as well as networking with other scholars, is the lifeblood of Leeds – and while the latter normally takes place during scheduled sessions and roundtable discussions, it also frequently occurs in the coffee breaks and wine receptions that break up the action.

This year, networking even made its way on to the dancefloor when, after several hours of enthusiastic dancing at the annual disco, I was propositioned by Aberystwyth PhD student Nathan Greasley about possible sessions for 2018. Nathan had attended my paper on Monday and it was this, rather than my dance-moves (always a triumph of stamina over style), which prompted the request. It may have been after 2am, but, evidently, keen medievalists never rest…

With the conclusion of yet another Leeds (and with my ears still reeling from what had been a frighteningly loud disco), my thoughts turn to the value of this event. It is hard overstate the importance of the IMC to the European medievalist community. Despite the wide time period and different disciplines covered by Medieval Studies, medievalists have managed to forge a strong and cohesive sense of identity – and, on this side of the Atlantic, Leeds has played a significant role in this. It provides a venue for European medievalists to meet regularly en masse and to present and discuss the latest research in their fields. The to-and-fro of scholarly exchange and the general bustle of the congress helps to re-energise tired teachers and to reassure PhD students of the wider value of their work. And, as the relationship between the UK and Europe fractures, it seems even more important to attend the congress and maintain long-forged links between scholarly communities on opposite sides of the Channel. But Leeds is also, simply, an opportunity to celebrate the arcane pursuit of Medieval Studies and the joy of working with medieval sources.

Having said this, attendance at Leeds remains an expensive affair and means that younger scholars, especially those without external funding, don’t always find it easy to join in the fun. The cost of registration and accommodation is pretty high and unlikely to decrease, especially as the financial effects of Brexit hit the UK economy. The bursaries offered by the IMC organising committee go a small way towards mitigating this cost. Yet, despite the barriers to attendance, I believe it is important for PhD students to experience this event at least once. It offers an opportunity – unrivalled in Europe – to share ideas and network with a wide variety of junior and senior scholars. This can lead to future collaboration and can help to establish reputations in a very competitive job market. The best way to participate in Leeds is, firstly, by presenting a paper and, secondly, by doing so in a pre-organised session rather than submitting an individual paper for consideration by the organising committee. Being part of a pre-organised session helps to ensure the coherence of your panel, which, in turn, will help to attract a larger audience. So, if you know others working on similar research themes, be pro-active in organising a session and don’t be afraid to invite more senior scholars to join you – even if it is just in the role of session moderator. The theme of next year’s congress is ‘Memory’ (which looks set to reassert history’s dominance at Leeds), but sessions and papers can be proposed on any topic – the theme is there to prompt rather than define content. The deadlines for submitting proposals are 31 August for individual papers and 30 September for sessions. These dates aren’t that far in the future so it might be best to follow Nathan Greasley’s example and start your preparations now… See you there next year!