St James at Compostela: A Cosmopolitan Cult and Shrine at the Ends of the Earth

Barely a century after the Muslim invasion of Spain in 711, a tomb was found in Galicia and declared to be that of the apostle St. James. The conquest had hardly touched Galicia in the far northwest, but the densely settled region was being forcibly joined to the kingdom of the Asturs, a tiny Christian realm huddled along the mountainous Atlantic fringe of Iberia. The Asturian king, Alfonso II, quickly endorsed Bishop Theodemir’s discovery of c. 830, and endowed a shrine; in 899, a new basilica, smartly adorned with Roman spolia seized in raids upon Muslim lands, was dedicated with the support of King Alfonso III.

Even by the standards of medieval saints’ legends, Galicia’s claim to the tomb of St. James the Greater was an audacious one. After all, the canonical Acts of the Apostles recorded his martyrdom in Jerusalem under Herod Agrippa. Not until the end of the sixth century do we find James first associated with the evangelization of Spain and the “western places”, but the legend spread widely enough for Aldhelm of Malmesbury to name the apostle as the first to convert the peoples of Spain.

We will never know exactly what was found at Compostela or why it was first said–and soon widely believed–to be St. James’s tomb. The great twelfth-century cathedral largely obliterated the remains of any tomb or of the ninth-century churches. That Romanesque building and its magnificent sculpture does attest to the success of the shrine and pilgrimage.

Today, the revived pilgrimage is doing very well. In 2010, the most recent jubilee year at Compostela, nearly 300,000 pilgrims walked or bicycled to the shrine; almost a million have done so over the last decade.

Modern visitors, of course, have various motives, and, for many, the “walk” may only cover the last hundred kilometres, the minimum needed for validation at the shrine. Still, the enduring popularity of the pilgrimage is a reminder of how much James’s cult and shrine came to be bound up with the long-distance journey and the spiritual significance of his tomb’s location near the ends of the earth. Unusually, James was represented across Europe as a pilgrim, identifying him with his worshippers, while their arduous trek was an act of devotion that brought to mind Jesus’s command to his apostles to “be witnesses to me…unto the uttermost part of earth.” 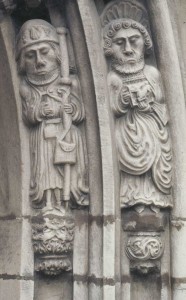 The Compostelan clergy used liturgy, the visual arts, and a remarkable dossier of texts to elevate the status of their apostolic shrine and suggest comparisons with Rome and the Holy Land. Nonetheless, their one great prize could hardly compete with the vast ensemble of relics and holy sites that Rome and the Holy Land offered to pilgrims. Bishop Diego Gelmírez, the great promoter of the cult, did seek to diversify the church’s holdings with a “holy theft” of relics from the rival metropolitan see of Braga, but, ultimately, the clergy of Compostela opted for another route. Through the architecture and decoration of the cathedral, together with the sermons, miracles, legends, and unusual Pilgrim’s Guide in the Book of St. James, they celebrated and sanctified the pilgrimage and highlighted the cosmopolitanism of the shrine and its pilgrims, parlaying the shrine’s singular position as the goal of a pilgrimage to the ends of the earth into the foundation of its powerful appeal and spiritual efficacy.

My work on Compostela grows out of my studies of art, ecclesiastical culture, and the church in medieval Galicia, a region which has often been marginal in the history and, more importantly, the modern historiography of the Iberian peninsula. For Galicia, the central Middle Ages was an expansive period, marked by the golden age of the pilgrimage, the region’s ascendancy within the kingdom of León, and–most visibly– the construction of innumerable Romanesque churches throughout the countryside. 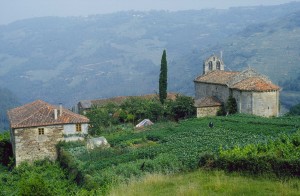 The Compostelan cult was also a product of Galicia’s own history, and it rested upon the memory of the region’s place in the Roman and Christian world of late antiquity and the vitality of that cultural and religious heritage in the early Middle Ages. In my forthcoming book, Culture and Society in Medieval Galicia: A Cultural Crossroads at the Edge of Europe (Brill), twenty-three international authors explore diverse aspects of medieval Galicia, from the Suevic kingdom of the fifth and sixth centuries to the age of the pilgrimage and the flowering of vernacular poetry. Together, they demonstrate how a geographically peripheral region could become a place of cultural exchange, and how the region’s remoteness became the basis for a paradoxical centrality in the world of medieval religious devotion and the art and culture which it fostered. 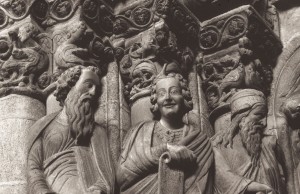