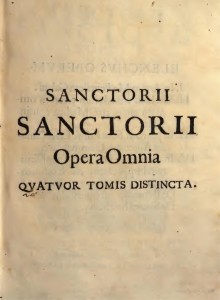 Santorio’s output occupies four volumes of an edition in 4° published in Venice in 1660 by Francesco Brogiolo, which also hosts the only known portrait of him.

the third the ‘Commentary on the first Fen of the first book of Avicenna’s Canon’ (Commentaria in primam Fen primi libri Canonis Avicennae);

The progression does not reflect any chronological need but is intended for didactical purposes, from the conventional to the more innovative works.

Indeed, the first book published by Santorio was the Methodi vitandorum errorum omnium (Venice 1602, apud societatem), a work that could be easily regarded as a methodological introduction to his thought and that also allows us to look closer to his background, as it shows Santorio’s studies as well as his scientific commitment.

It was this book on differential diagnosis that established his fame and that, coupled with the strength of his social connections, led to the invitation to serve as professor of theoretical medicine at the University of Padua. As the title declares, the book would present a method to avoid all errors that happen in medical practice by focusing on experience, analogy and deduction. The work is also clearly reminiscent of the influence of Jacopo Zabarella (1533-1589), Santorio’s teacher in Padua and one of the most important logicians of the XVI century, celebrated author of the Opera logica (Venice 1578) whose sections show a particular emphasis for methodological questions.