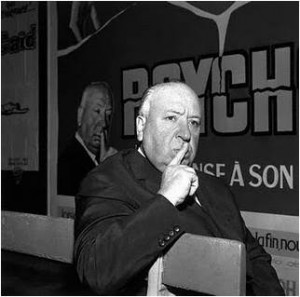 The next Screen Talks event will be on Monday 25th February, 6.30pm.  Dr Helen Hanson will introduce Alfred’s Hitchcock’s Psycho (1960)

When asked by the interviewers to outline the guiding principle in making his films, Alfred Hitchcock playfully quipped: ‘always make the audience suffer as much as possible’.  Hitchcock’s films are still renowned for their ability to grip an audience through their precisely controlled and suspenseful unfolding of events.  During his career Hitchcock fostered his public image as ‘Master of Suspense’, and he was adept in his performance and handling of his public persona. He was well known for appearing in brief on-screen cameos and his familiarity with audiences was further developed in his droll role introducing episodes of his television series Alfred Hitchcock Presents.

In 1959, after making a series of high budget technicolour suspense thrillers, which typify ‘Hitchockian style’ in their balance of glamour and crime, such as Dial M for Murder (1954), Rear Window (1954), To Catch a Thief (1955) The Man Who Knew Too Much (1956), Vertigo (1958) and North by Northwest (1959) Hitchcock shifted both his style and production strategy, adapting Robert Bloch’s sensational pulp horror novel, Psycho.  The shift, for Hitchcock, was to a more gritty aesthetic and the opportunity to experiment with shocking narrative material and a frank presentation of sex and violence.  Psycho was produced on a low budget with a tight production schedule, and the events surrounding the film’s production are dramatised in Sasha Gervasi’s film Hitchcock, on general release at the moment.  One of the key features of the film’s release was the careful control of its marketing. In posters and publicity (pitcured above) Hitchcock exhorted viewers ‘not to tell’ the secrets of the plot.

The release of Gervasi’s film, and the recent BBC/HBO film The Girl (broadcast on BBC in December) provides an opportunity to revisit Psycho to explore the ‘stories’ that have sprung up about its genesis as a Hitchcock project, to consider the ways in which filmmakers appear on screen, and to ask why this film continues to grip and unsettle audiences.

Dr Helen Hanson will introduce the film, and there will be opportunities for informal discussion in the bar afterwards.

Helen has written about Psycho in Contemporary American Cinema.  Find out more about Helen’s research here.