Our Screen Talks event for The Great Gatsby brought over 100 audience members to Exeter Picturehouse and almost as many different reactions to the film. The process of adaptation was a key element in Dr Sinéad Moynihan’s introduction to the film, and a big debating point afterward. This blog brings a different perspective to the film – the reaction of a Screen Talks audience member who had not read the book. This special guest post by University of Exeter’s Zoe Bulaitis (Department of English, Arts & Culture) follows below. 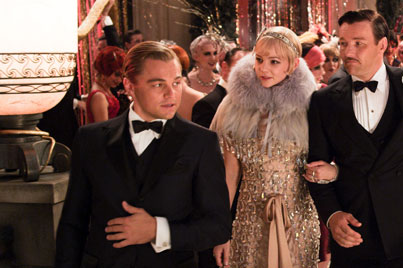 Before watching Luhrmann’s film, I knew nothing about The Great Gatsby. Despite the fact it is regarded as one of the strongest contenders for the “Great American Novel”, regardless of its status as being a frequent choice for curricular Literature Studies and adapted into four films prior to this most recent attempt – I have not read a page nor harboured any facts about the novel at all. Actually, that statement is not wholly correct. In all honesty, I knew it was an American novel (this I had deducted from the fact it was written by Fitzgerald) and I had presumed at some point of the story (probably of relative importance to the plot) there would be a character called Gatsby, who may or may not turn out to be great. These are the skills of deduction that a BA in English Literature provide you with when faced with the situation of predicting information about a text that you have not read.

When I encountered the trailer for Baz Luhrmann’s latest film for the first time, unsuspecting of the extreme sensory invasion, I was compelled to shut my eyes and ears off from the spectacle playing before me at the words “Gatsby, What Gatsby?”. Only thirty seconds into the extensive trailer, it was actress Cary Mulligan’s dainty inquiry that confirmed what I had already begun to guess: there’s a book adaptation movie coming.

My BA in English was prefaced by a childhood spent reading extensively; I have a comprehensive (albeit surface-level in places) understanding of most ultra-famous literary works. I have loved, and will continue to love reading “The Classics” of the literary canon. The feeling of sitting down with a book which has been valorised by generations of readers provides you with a sense of contentedness – a guarantee that the pages before you are set to be worthwhile and profound. This is a feeling, from my experience, that I have not found to be replicated in filmic adaptation of such texts. While Luhrmann’s adaptation of Romeo and Juliet may be a success in the realm of cinema, it is unfaithful in conveying the original sentiments of Shakespeare’s tragedy. Certainly both book and film end with the star-crossed suicides of the titular characters, however, the route to this climax and the style in which is portrayed is entirely different. Shakespeare’s original cites parental pressures, the close knit Verona communities and the ignorance of an old apothecary while Luhrmann’s adaptation utilizes police helicopters, lad culture and Para-Ordnance P-13 pistols. I argue that the film adaptation is a different product entirely, and therefore my review of The Great Gatsby will not seek to draw comparisons to the text (which I have not and will not be reading in the near future). Instead I ask whether the film is good enough as a film.

I would like to clarify in reference to Romeo and Juliet above that I prefer a film adaptation that seeks to do something radical with a literary text than to tip-toe around trying to re-invent the same wheel. Isn’t it better to initiate something new, than imitate something already brilliant? For this reason I greatly admire Baz Luhrmann’s efforts in adaptation. His unique style accentuates what is of interest to his directorial tastes. In the trailer to the movie Luhrmann’s name is emblazoned in an Art Deco gilded gold frame. His authorial status is celebrated and is a major draw for the film. His name precedes the celebrity cast of actors. The fact that the film is adapted from a popular story is perhaps less significant than the gravitas of Luhrmann’s method of storytelling.

To briefly contextualize, it remains an undisputable fact that the majority of people like to watch literary adaptations. Since the Academy Awards began in 1927-8, ‘more than three fourths of the awards for “best picture” have gone to adaptations . . . [and that] the all-time box-office successes favour novels even more’ . Over the past year, some of the highest grossing box office sales in the United Kingdom were Les Miserables (January 2013), The Hobbit (December 2012 – January 2013) and Oz the Great and Powerful (March 2013) all adapted from novels. Since literary adaptations began there have been discussions of fidelity. Such conversations can be a little tiresome and repetitive – especially when you haven’t read the original, or think that the film version is less boring for the non-specialist reader (wading through 1500 pages of French-English translation of the 1862 writing of Victor Hugo is definitely a most arduous activity than the recent sing-a-long with Hugh Jackman and Amanda Seyfried). Wouldn’t it be fun to accept that the differences of medium limit the fidelity to the original text, but also offer new potentialities of storytelling?

Michael Klein and Gillian Parker posit an interesting suggestion that there are three kinds of adaptation:

“First, ‘fidelity to the main thrust of the narrative’; second, the approach which ‘retains the core of the structure of the narrative while significantly reinterpreting or, in some cases, deconstructing the source text’; and, third, regarding ‘the source merely as raw material, as simply the occasion for an original work’

I personally prefer the third option –the closer a director sticks to a text, the more frustrating the tiniest of neglects and nuanced differences become. Previously, I have not taken well to the cherished classics that I have read being adapted into blockbuster movies. I left the cinema halfway through the 2009 attempt at A Picture of Dorian Gray appalled at the sub-standard CGI and the weird temporal leap to WW1 in a story set in the Victorian era. As appealing as Colin Firth is in that white shirt, I still prefer Pride and Prejudice as Jane Austen penned it. So maybe, as Klein and Parker suggest, the classics are better off if they are allowed to become mere “raw materials” for the creative talent of the filmmaker. If you want to see a version utterly faithful to the original – why don’t you just read the book again?

The Great Gatsby (2013) was a visual treat. The actors and actresses looked superb in their 20s couture, and I will not be lead to believe that a written description of a lavish party could top Luhrmann’s filmic spectacle. Never have I seen a party more decadent on the big screen, nor could I imagine how it could be exceeded. The atmosphere of sheer extravagance and the imagination of Luhrmann is a match to the expectations of Gatsby in terms of brilliance. Luhrmann thrives on these energetic scenes, and whilst the dialogue and romances may appear a little unbelievable (and at times pathetic) throughout the film, there is little doubt in the authentic wonder of the lucky party-goers.

Luhrmann’s sense of speed and activity is successfully contrasted with the deaths of Gatsby (Leonardo DiCaprio) and the car-crash victim Myrtle Wilson (Isla Fisher) whose deaths are among the most striking moments of the film. Taking a breath right at the moment when life is extinguished, the two characters that die in the novel (Gatsby and car-crash victim Myrtle Wilson) both meet their end in slow motion. Death, like the vibrancy of a party is equally difficult to capture within the literary text. To confirm my suspicions that it is easier to die on screen than in a novel, I skimmed through the end of novel to compare the death scenes: for Myrtle Wilson only: “the business was over” is recorded and for Gatsby: “the chauffeur heard the shots”. For both Myrtle and Gatsby there is no written record of the moment of death. In the film, there is a blow-by-blow detailing of the event. Talking to a friend who has read the book, after having seen the film, she commented that in the book the deaths don’t really seem to carry much significance – the true betrayal and tragedy of the story occurs before the death of Gatsby. However, in Luhrmann’s film it is certainly the finale. What interests me is not the comparing the film to the book, but to analyze Luhrmann’s persistent drive and obsession with the death of the star throughout his filmic career. Romeo and Juliet is perhaps a bad example, as from page one of the play and the opening of the film alike, you know that the stars are destined to “take their life”. However, in Moulin Rouge Satine’s (Nicole Kidman) death is unexpected in the carnivalesque madhouse that the rest of the film consists of. Her death comes at the final curtain and much like Gatsby is dramatic and cinematically stunning.

I want to emphasize that I am not naturally morbid – the death-scenes are just one example of why I enjoyed watching this film. But I have chosen them as my example as they are something that I expected Luhrmann to do well as Luhrmann, in no relation to whatever the original was like. I suppose I would prefer it is we compared like with like, a good film with a bad film (or another good film), a good directorial style and a bad one (or a bad director in a moment of brilliance). Judging a film by a book seems to me to be unfair and unproductive in the process of creative storytelling.