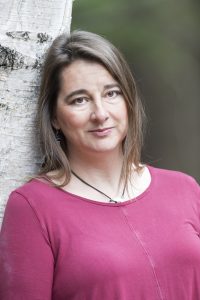 Lisa Brooks is an Abenaki writer and scholar who lives and works in the Kwinitekw (Connecticut River) Valley. She is active in the Five College Native American and Indigenous Studies Program, which she chaired from 2013-2017. While an undergraduate at Goddard College, Brooks worked in the tribal office of the Abenaki Nation of Missisquoi, on aboriginal rights and land preservation cases; this was the place she received her most important education—on the land and at kitchen tables, with other Abenaki community members. Her first book, The Common Pot: The Recovery of Native Space in the Northeast(University of Minnesota Press 2008), which focused on the recovery of Native writing and spaces, received the Media Ecology Association's Dorothy Lee Award for Outstanding Scholarship in the Ecology of Culture in 2011. Her second book, Our Beloved Kin: A New History of King Philip’s War received the Bancroft Prize for American History and Diplomacy and the New England Society Book Award for Historical Nonfiction in 2019. As a 2016-17 Whiting Public Engagement Fellow, she worked with a team at Amherst College to develop a digital companion to Our Beloved Kin, featuring ArcGIS maps, original documents, and place-based images. In additional to her books and contributions to numerous edited volumes, Brooks has published articles in American Literary History, the International Journal of Critical Indigenous Studies, Northeastern Naturalist, PMLA, Studies in American Indian Literatures, and William and Mary Quarterly. Brooks served on the inaugural Council of the Native American and Indigenous Studies Association (NAISA) and was honored in 2018 with the Maine Historical Society’s Neal Allen Award for exceptional contributions to Maine history. Prior to joining the faculty at Amherst, Brooks was John L. Loeb Associate Professor of the Humanities at Harvard University. She is deeply honored that Early American Literature is recognizing Our Beloved Kin with its Book Prize at the 2020 "Special Topics" meeting.