Check back here for upcoming publications of relevance to the symposium theme. 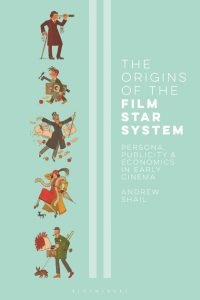 Film stars are central to today’s celebrity-obsessed culture. Yet, in the early decades of cinema, the industry faced disincentives to using the identities of performers for publicity. For over 12 years after the invention of the projector, the major production centres of the world made fiction films without the use of constructed star personas. Explaining then the reasons why and how film companies in North America and Europe created ‘stars,’ in the years 1909-1911, Andrew Shail here responds to Richard deCordova’s comprehensive and landmark account, which argued that the development of the Hollywood star system was indebted to precise collaboration between the American press and movie industry. Assembling evidence from a multitude of unused and little-used archives, Shail reveals how this major aspect of show business actually originated in France.

Furthermore, Shail reassesses this key period of early cinema history to explore character-based series films. His astute analysis demonstrates how such characters both prefigured and precipitated the star system, that series characters and the ‘constellation’ of film stars are functionally equivalent and finally argues that openly fictional characters still provide the primary model for ‘real’ film stars today. Writing with clarity on complex new revelations, this revisionary cultural history is an invaluable addition to the study of stardom at the start of the 20th century and a vital tool to understanding the use of star personas through time.