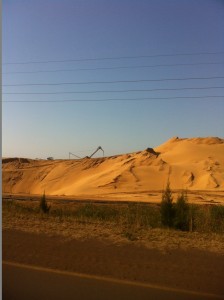 A focus for the Day was the ethics of mining and the relationships of communities, especially faith communities, with mines in their areas. Esther D. Reed spoke from her experience of recent site visits in South Africa about how mining might play its part in the big questions about human flourishing and responsibility before God, the prosperity and health of nations, love of God and neighbour.

The mining industry has a fairly poor public image. This is sometimes but not always deserved. There have been many, many incidents of environmental degradation, poor working conditions, relocation projects that have brought much misery, legacy issues left unaddressed, the extraction of mineral and other wealth from a region without regard for much besides the share price. But some companies have become pivotal partners with national and local government, and many stakeholders, including local churches, in tackling complex social, health, infrastructure and economic problems in many countries around the world.

Anyone with a mobile phone or washing machine, who uses electricity that travels down copper wires, rides in cars with emission control devices made of platinum, handles coins that contain nickel, has had restorative dentistry involving a gold alloy crown, uses buildings with ceramics optimized for stability and strength with zircon, toothpaste and sun-screen, and much more, benefits from the products of mining.

We cannot separate attention to community relations, the health of communities after mine closure, legacy issues, etc., at site-level from wider issues warnings from climate scientists that, if current population and consumption trends continue, by the 2030s, we shall need the equivalent of two earths to support us (Global Footprint Network). All the more reason for the churches, mining companies, and others, to talk about environmental standards, development, and the contribution of mining to the health of communities, regions and nation-states, and more; the true wealth of nations.

That high-level leadership in the industry is serious about what mining well entails is good news.

You can read more on the Archbishop of Canterbury’s web-site.

Dr. Esther Reed is Associate Professor in the Department of Theology and Religion in the University of Exeter. She is Director of the Network for Religion in Public Life and her current research projects include work on peace ethics in an age of risk, the ethics of taxation, and narrative theology in Religious Education.