One of our number, Dr Deryn Guest of the University of Birmingham, was unfortunately unable to be with us this time. Those present at the first core group meeting were Dr Susannah Cornwall (Exeter), Dr Adriaan Van Klinken (Lecturer in African Christianity at Leeds), Dr Rob Clucas (Lecturer in Law at Hull, and former trustee of Changing Attitude, a group working for the full inclusion of LGBT people in the Anglican Communion), and Revd Dr Christina Beardsley (Head of Multifaith Chaplaincy at Chelsea and Westminster Hospital NHS Foundation Trust, and representative of Sibyls, the Christian transgender spirituality group).

The following day saw a larger meeting at Reed Hall, with the core group and other people representing intersex and trans groups and various academic disciplines (including Theology and Religion, Islamic Studies, and Law) for a workshop on Variant Sex and Gender, Religion and Law. We were privileged to hear from a range of excellent speakers, some of whom have been instrumental in advancing equality and human rights for intersex and transgender people in the UK and beyond.

They included Professor Stephen Whittle, Professor of Equalities Law at Manchester Metropolitan University, and a founder member of Press For Change, an organization set up in the early 1990s to improve the rights and treatment of trans people in the UK. Stephen Whittle and his colleagues at Press For Change were directly involved in bringing about legislation such as the Gender Recognition Act 2004 and the Equality Act 2010. Stephen spoke on the importance of the human right to practice one’s religion alone or in community, and the necessity of ensuring that this is made possible for transgender people. 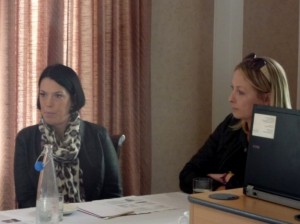 Holly Greenberry and Dawn Vago, co-directors of Intersex UK, spoke about Intersex UK’s work in advocating legal and bodily autonomy for people with intersex bodies, and the depathologization of healthy intersex bodies via education and lived testimony. Intersex UK has recently addressed world member states at the United Nations and is now working with the World Health Organization. We were especially glad to be able to have Dawn and Holly with us in Exeter, given that they are so busy and were actually en route to Edinburgh to address the conference of the Scottish Trans Alliance for Trans and Intersex Equality and Human Rights in the Isles later that day! 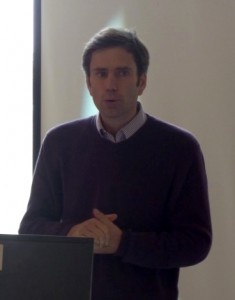 Professor Jonathan Herring, Professor of Law at Exeter College, Oxford, spoke on “Making Family Law Less Sexy”, and suggested that family law would do better to begin from considerations of the ethics of care rather than from questions such as consummation. This would render variant sex and gender less significant in law, and would be less exclusive of intersex and trans people and their own relationships of care.
Andrew Worthley of City University Law School suggested that faith communities should consider adopting a voluntary “equality duty” similar to the Public Sector Equality Duty binding on the public sector in Britain. He noted that, currently, religious groups often seek exemption from equalities legislation, but that they could fruitfully adopt a commitment to remove disadvantages for and ensure the full participation of intersex and transgender people. 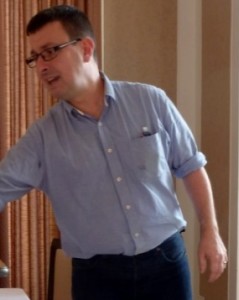 Revd Chris Dowd, a doctoral student at Queen’s Foundation for Ecumenical Theological Education in Birmingham, presented on his doctoral research with transgender Christians in Britain. He noted the importance of respecting “indigenous knowledge” rather than imposing models and frameworks from outside.

Dr Rob Clucas presented on “Trans People and the Church of England: The Legal and Institutional Field”, noting the importance of legally recognized public relationships for mental health and wellbeing, and suggesting that full recognition in church contexts was equally important for trans people’s spiritual wellbeing. 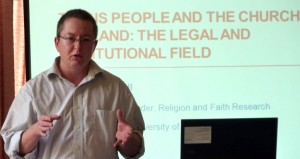 He also noted the cumulative power of “microaggressions”, small seemingly innocuous acts of othering which can build up to be extremely damaging for minority groups, and pointed out how the Church of England may consciously or unconsciously be contributing to the stress and anxiety of many transgender people.

Dr Mitchell Travis, Lecturer in Law at Exeter, presented on “Consent, Gender Deception and the Criminalization of Intersex Bodies”. He discussed the implications of the recent case of Crown versus McNally (2013), in which it was ruled that failing to reveal one’s sex to one’s sexual or romantic partner constituted deception. Mitch noted the slippage in this case between active deception and non-disclosure, and suggested that this might be particularly troubling and render intersex people vulnerable. Could intersex people, he asked, be considered always potentially “deceptive” if they do not choose to disclose their intersex status or other elements of their medical and gender history to a partner? Other information, such as STI status and even one’s name does not legally need to be disclosed to a sexual partner; the McNally ruling means there is now a risk that people will be criminalized on the grounds of their unusual but natural state of embodiment.

This was a stimulating and exciting day, and a reminder that legal and religious questions in the areas of sex and gender are often closely connected, particularly in the case of an established denomination such as the Church of England. It was made possible by a grant from the HASS Project Development Fund. Special thanks must also go to Bethany Wagstaff for all her hard work organizing transport and other practical matters. The next workshop will take place sometime in the first half of 2015, and is likely to focus on questions of spirituality and wellbeing for intersex and trans people –watch this space!

This work also took place in association with the HASS Identities and Beliefs theme.