It cannot be assumed that countries with large mineral deposits should consider themselves blessed. The phrase ‘resource curse’ is familiar in debates about how natural resources like metals, minerals and oil are sourced by relatively developed countries in ways that leave a trail of devastation in their wake. But it is not enough to scapegoat the mining industry. Most, if not all, citizens of relatively developed countries benefit from the products of mining. Churches, pension funds, and many other investment bodies, also have money in mining and are thereby implicated in the actions of the companies in which they are invested. Mining companies vary considerably in policy and practice with respect to environmental protections, wage levels and employment practices, the payment of taxes and other revenues, relationships with local communities, and more. 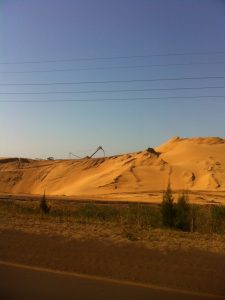 Mine-dredging of sand dunes at Richards Bay in KwaZulu-Natal Province for ilmenite, rutile and zircon.

Esther Reed has been involved with the Mining and Faith Reflections Initiative since 2014 as member companies and churches aim inter alia to enable and support a dialogue in ways that encourage openness, honesty and the sharing of different perspectives on mining. One current topic of conversation is the possibility of chaplaincies at mine sites amongst some of the participating companies.