As tourists look at the view from Mtatsminda (Holy Mountain) north across Tbilisi they are struck first and foremost by the enormous scale of the new Sameba (Trinity) Cathedral straight ahead of them; a little higher still is the Cathedral of the Iverian Virgin Mary rising from Makhata hill and the casual viewer would be correct in interpreting this as a sign of the immense influence the Georgian Orthodox Church wields in today’s Georgia.

If however you turn to the left and look northwest, there is something a little odd on the horizon. On a low hill stands a black shape looking uncannily like Stonehenge and glowering forbiddingly even on the sunniest of days. If you didn’t know any better you might be forgiven for thinking that Tbilisi has a megalithic monument to beat all others, but then the sheer size of the structure and its hulking darkness may cause the curious to wonder just what exactly it is that they are looking at?

The answer is The Chronicle of Georgia, a grandiose vanity project begun in 1985 in what would turn out to be the dying years of the Soviet Union by the celebrated Soviet modernist sculptor Zurab Tsereteli, President of the Russian Academy of Arts. Strangely this vast monument is mentioned in no guide book to modern Tbilisi and very few locals even know it is there, let alone admitting to visiting the place. The Tbilisi Museum of Modern Art is a private institution owned by Tsereteli and its permanent collection consists only of his works and a large collection of photographs of the sculptor with the world’s wealthiest and most influential people. However none of these pictures nor the many coffee table books on show make reference to The Chronicle….So what on earth is it? What is going on? Given the dearth of information on the project, apart from establishing that it began with Soviet state funding in 1985, all that follows has been gleaned from conversation with a local architect and first-hand observations based on a visit to the site. 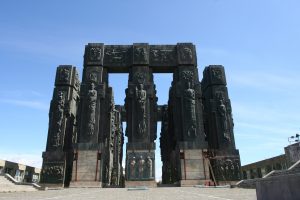 In the dying days of the Soviet Union those favoured by the Party were exceptionally powerful and, if you had the right connections, it was easy for celebrated cultural figures to raise funding for vanity projects – which is what Tbilisi society says was the case with Tsereteli and his Chronicle. However the timing proved to be off; only six years later the Soviet Union collapsed and the mysterious buildings around the complex remained unfinished. More seriously perhaps, several bronze panels were stolen and, at the time of writing, look unlikely ever to be replaced. When we look at the timing of the monument things are seriously weird because six years before the end of Communism Tsereteli built a hymn of praise to Christianity and, specifically, a Georgian Christian past on a hill outside the capital. The bottom quarter of each of the hulking monoliths depicted a scene from the life of Christ (it is a number of these panels that have now been stolen) and above each of these Christian scenes a hero (or heroine – but mainly heroes) of Georgian history is depicted in a cruciform cartouche in a manner that deliberately equates the life of Christ with the struggles of the Georgian nation. This goes against the iconographical conventions of Christian Art, where Christ is normally placed in the most exalted position and often shown larger than the figures around him; he is certainly not placed at ground level a quarter of the size of the human figures above him.

In case the viewer misses the significance of the visual imagery on a terrace to the left as the visitor approaches the monument are thirteen double life-sized figures representing the Thirteen Syrian or Assyrian Fathers who are purported to have brought monasticism to sixth century Georgia. They stand gazing out over the monument and the eerie ambience of the place is… well, to be honest you really do feel that you are in an episode of Game of Thrones and gaze around for the dragons or the white walkers to appear. 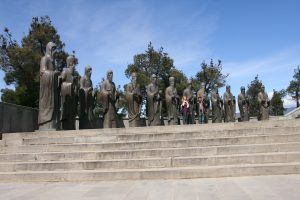 But this is Georgia, a place that often seems unacquainted with irony or parody. Whilst the monument gives the outsider an uneasy feeling that Tsereteli was using Christian imagery to mould a personal view of a glorious Georgian past; very much a visual statement in the mode of Blake’s Jerusalem that Christ is synonymous with the destiny of the nation of Georgia (in the way that ‘Jerusalem was built amongst the dark Satanic mills’), there is now an added layer of meaning. Today the land the monument stands on is covered with signs stating clearly (in Georgian) ‘territory of the church’. To the north of the monument itself a new chapel has been constructed and the Georgian Church has appropriated this strange, late Communist monument to a quasi-religious national past for itself.

Given the fact that Christ is subordinate to the heroes of Georgian identity this is, theologically speaking, rather strange. But then the pieces of the puzzle fall into place; in a Communist society uneducated in religion there would be no difficulty in raising men above the Son of God – the more relevant question is perhaps why Christ is included in this historical vision at all?  More recently, since the fall of Communism, there has been a resurgence in religiosity and in the number expressing a religious vocation, but there has not been a similar expansion in theological education. Rather than looking to the ancient monastery of Iviron on Mount Athos founded by Georgian monks in the tenth century as their source of spiritual learning, the Georgian Orthodox Church has turned instead towards Moscow and follows a hierarchy as debilitated as the rest of the post-communist world by the Soviet prohibition of theological study.

The Chronicle of Georgia can best be understood as a result of this theological weakness; a strange hybrid imagery where a localised form of Christianity becomes inextricably entwined with fierce nationalism – it is a vision which is strangely powerful and very, very unsettling. Jokes about Mordor or the land beyond the Wall don’t seem quite so funny when you are actually there and that might be why so few people visit the monument. Certainly the tide of Nationalism (with a capital ‘N’) sweeping the world at the moment feels very dangerous when in a place where Christ appears subordinate to the desires of his earthly servants.