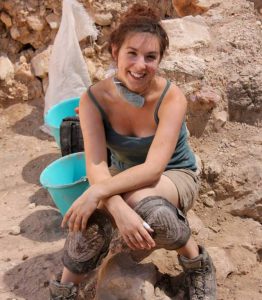 Since 2013 I have been involved with an incredible archaeological project just outside of the Old City walls of Jerusalem. I found out about the dig during my MA Jewish Studies at KCL where I was being taught a module on the Bible and Archaeology by Prof. Joan Taylor. Joan had previously worked with Dr Shimon Gibson on other projects and he, as the dig director, was launching a new expedition on Mount Zion, Jerusalem. That summer I spent two weeks digging out a dark, wet, first century CE cistern and found the first complete vessel, a cooking pot, of the dig season. It may have been brought down there when people fled from the Romans during the destruction of Jerusalem and cooked underground whilst in hiding. I think that was the moment I fell in love with archaeology. Nobody else had seen or touched this item for thousands of years until I found it.

The site is located on the slope outside the Old City walls but was within the ancient walls during the Roman period. In the Byzantine period the site would have been at the southern end of the Cardo Maximus as can be seen on the Madaba map. In the Early Islamic period Mount Zion was used for domestic houses, but the Crusaders and Ayyubids built fortifications across the mount including a gate tower, the remains of which are in this excavation. The site is just outside of the Zion Gate and is a continuation of excavations that commenced in the 1970s by Magen Broshi. In previous seasons the remains of a wealthy first century domestic building containing a mikveh, three ovens, a cistern and a bathtub were found. In the deepest area that has been excavated a large mosaic and partially constructed archway was found from the Byzantine period. 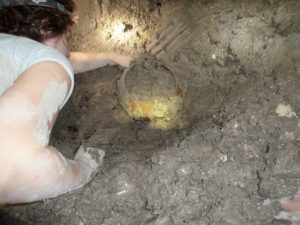 The following year I was invited back to the team as a staff member, an Assistant to an Area Supervisor working on a different area of the site. It was disappointing that I could not return to my previous area, as it had become too deep to work in safely but it was thrilling to have been noticed and given a staff position. The 2014 season was very different to my first experience. Firstly as staff I had to stay for all four weeks of the dig season and secondly, I did not find anything near as exciting as the complete cooking vessel. But that’s archaeology for you. In 2015 and 2016 I returned as Assistant to a new Area Supervisor. However, in 2016 I was given for the first time my own little area which I was completely in charge of. Some may say it was beginners luck, but my team uncovered an ostracon, a pearl and a murex shell amongst other finds that really brought back that thrill I experienced in my first season in the muddy cistern. We also hosted a community day where families came and dug with us one weekend, the child of the site director, Dr Rafi Lewis, found our first gold coin  and it has Nero’s head on it. Our metal detecting guys were not happy!

More information about the coin can be found here: http://www.biblicalarchaeology.org/daily/ancient-cultures/daily-life-and-practice/gold-nero-coin-jerusalem/.

I felt privileged to be asked to present my research twice in association with this project. In 2015 I gave a presentation to all the dig volunteers and staff on archaeology and Israelite sacrifice. It was the first time I’d presented my research that wasn’t just to other postgraduates, instead it was a mixture of professional archaeologists and non-academic volunteers. It was a great experience though and everyone was really interested in what I had said. The following year I was invited to speak on the University of the Holy Land’s Graduate Research Seminar Series in association with the Albright Institute. It was to take place at Hebrew University and I presented on the use of food and alcohol in Israelite Household Religion. The questions I received afterwards were challenging but greatly appreciated and many people came up to me afterwards and told me how interesting and informative they found it. 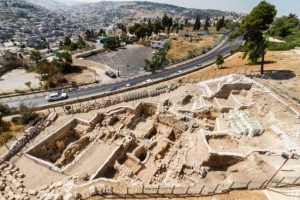 This summer I am returning to Mount Zion as an Area Supervisor. It will be a lot of responsibility; accurately recording every dig square, find, wall, baulk and drawing maps is imperative for scholars to be able to use this data in the future. Shimon Gibson has also mentioned that he wants me to be involved with the publication of reports particularly related to the animal bones that have been found on the site because of my research on food and sacrifice. This year will be my preparation for a future dig that Dr Gibson hopes to launch in 2019 in the Armenian Gardens within the Old City walls. I hope that I will be able to be involved with his excavations in the future, being a part of the Mount Zion team has been an amazing experience both in terms of the friends I have made over the years and the opportunities it has opened up for me academically. Going on that first dig in 2013 was probably the best decision of my life.

More information about the dig can be found here: https://digmountzion.uncc.edu/