At a time when over 80 per cent of the world’s population identifies as having a faith, religion is not a topic any thinking person can afford to dismiss. Scholars of theology and religion are particularly interested in context. What difference does social location make to how we read and interpret sacred texts, novels, films, poetry, lyrics, political treatises, and other texts? What motivates people to belong to faith communities? How do expressions of religion vary according to time and culture? Should religious education be taught in state schools? How does religious heritage continue to shape our society today? Is the world becoming increasingly secularized? 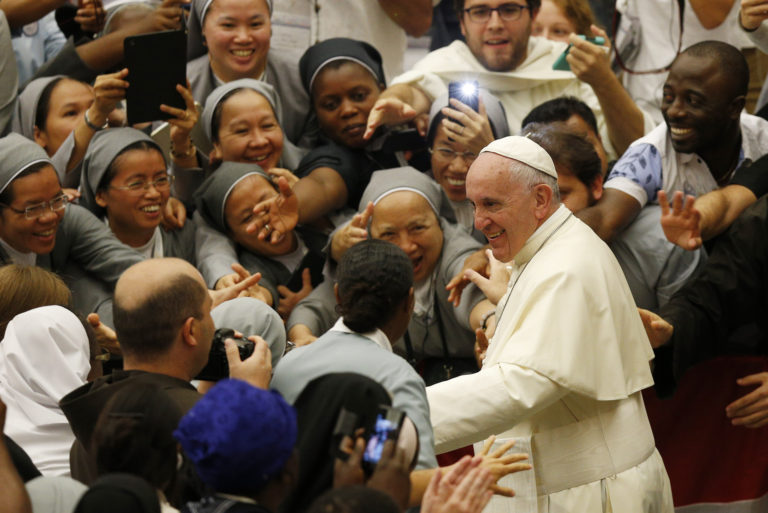 Pope Francis leaves an audience with religious from around the world in Paul VI Hall at the Vatican, Sept. 17. (CNS photo/Paul Haring)

A degree in Theology and Religion gives you the chance to interact critically with a wide range of texts, drawing on a host of theoretical and methodological approaches. You might explore how queer critical theory influences understandings of sacred texts; or how postcolonial studies shape critical accounts of the relationships between religion, economics and empire; or how feminist approaches prompt re-examinations of religious texts and the Christian theological canon. You might use social-scientific approaches to find out about the cultures in which the earliest biblical texts were produced.

Our students write dissertations on topics such as Muslim identity in modern Britain; uses of religious imagery in alt-right rhetoric; new religious movements; understandings of spirit possession in cross-cultural settings; the new atheism; and the interactions between civil religion, law, economics and the public sphere. They receive training in public speaking and presentation skills that allow them to communicate effectively with a wide range of audiences.

Theology and Religion at Exeter allows you to undertake research that trains you to reflect critically on your own and other contexts. As a discipline, Theology and Religion draws on and interacts with fields such as sociology, anthropology, gender studies, and critical theory. Some of our undergraduate students devise their own research projects, and receive support to go through an ethical approval process and carry out qualitative research. Recent projects have focused on topics such as Christianity and eating disorders; trauma and sexual abuse; religious affiliation among university students; and food insecurity.

Our graduates go on to work in careers such as social work, journalism, international development, education, law and social policy. Consider developing your critical skills with us, and work out what you want to know about our world and what goes on in it.