On Tuesday 21 October, St Mary le Bow Church, London, Christian Aid launched its latest report Tax for the Common Good. This report brings together two subjects that are usually far apart: theology and tax. Esther D. Reed and other authors look at what lessons the Bible may hold about matters such as the purpose of tax, how governments should apply it, how companies and individuals should pay it and what they should expect of governments in return. Download the report here. 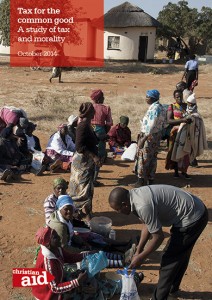 Esther explores what Christian ethics can tell us about the taxation of multinational companies. She argues that such companies are required to pay more tax than the law requires of them, if failure to do so would damage the conditions required for everyone to flourish. She further argues that the fact of human sinfulness makes it necessary to have coercive measures at national and international level to prevent tax evasion and restrain tax avoidance.

In his foreword to the new report, Christian Aid’s Chair, Dr Rowan Williams, expresses his hope that the report will stimulate thought and decisions among people who are able to influence the behaviour and policies of companies, ‘so that tax justice at last becomes a reality’.