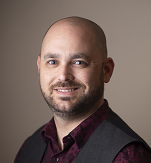 My name is Simon and I am a MAGPIE. One of the questions I get asked is what do I do when I am not fulfilling the role of a MAGPIE and how does what I do feed into the work that I do within the setting of healthcare research at the University of Exeter. Well, if you have ever asked me that, or even just wondered, fear not – I’m here to tell you!

I am a volunteer for Epilepsy Action, a national charity set up to support people with epilepsy. I am also an advocate for people with epilepsy on social media and I have my own website to offer support and information to people with epilepsy. Epilepsy can be a debilitating, isolating and depressing condition – indeed, 60% of adults diagnosed with epilepsy will suffer from some form of depression in their lifetime. For this reason, it is important to ensure that newly diagnosed people have somewhere to turn. It is so difficult following a diagnosis to really comprehend that you are not alone and that there are people who can help you, guide you, inform you and strengthen you.

In 2016 I started a Coffee and Chat group in Exeter on behalf of Epilepsy Action. The group does exactly what it says on the tin, so to speak. We have a coffee (or alternative beverage!) and we chat. We talk about our seizures, our medications, the side effects, the challenges of daily living – anything and everything can be discussed at Coffee and Chat. It is a safe, supportive environment, not just for people with epilepsy, but anyone affected by epilepsy, be they family members, friends or carers.

In 2017, I started a second Coffee and Chat group, this time to cater for people in Torbay. The format is the same and we have a second thriving community of people who enjoy the benefits of sharing and supporting each other. This past year, I have launched a third group based ta the University of Exeter Streatham Campus which will in time, I hope, grow to support more and more people based on campus who are affected by epilepsy.

Beyond the local community there is still a need to advocate for, and support, the needs of people living with epilepsy. Having joined Twitter many years ago and not really understood the point initially, I began to follow others who advocate for awareness and realised that there is a huge community of caring, knowledgeable, supportive people who work together to raise the profile of epilepsy, share information, support achievements and generally empower people with epilepsy to be open about their condition because it is only through being open that we can dispel some of the myths and misinformation that still abound.

So, I hear you ask, why does this make any difference to researchers? I’ll let you into a little secret! Way back in early 2017 I was running one support group and I received an email from someone at the University. They explained there were a couple of projects at the University which were looking at epilepsy and they wanted to put together a patient engagement group and asked if I would be willing to help. Of course, I said yes. Over the following weeks and months we met with several research groups and what happened was quite an eye opener. The researchers did not fully understand what issues most bothered people with epilepsy. The natural assumption for those not affected was that seizure control is the most important thing. But here’s the issue – it’s not, or at least not always. For many, it is about the reduction in the life affecting side effects of medications. It is about how we can use technology to improve daily life, monitor epileptic activity to give early warning of seizures, reducing the recovery time following a seizure and providing tools that allow us to live our lives without the need for family and friends to become full time carers for us.

The lesson here is clear. Patients may have different drives, goals or ambitions for research. As the end user, their perspective is hugely important to research into epilepsy. If you are planning any healthcare research then the perspective of the end user must be integral to informing the direction of that research.

If you want to find out more about Simon, he has website or you can find him on Twitter here. If you want to reach out to Simon you can do so via his website here.

View all posts by Silvia Bortoli