Engagement with library data is at the heart of the Unlimited Value project, in helping libraries learn how to maximise social impact by making data driven, informed decisions. But how do libraries learn to use the data they possess and how can they do this openly and in collaboration with other stakeholders? ODI Devon is taking a leading role in helping the other Unlimited Value partners develop a stakeholder-led, collaborative and open approach to managing and acting on their service user data. In this post we explain more about the Open Data Institute and ODI Devon, and share how these organisations are helping to make pioneering steps in using data to make libraries more relevant, impactful and resilient than ever before. 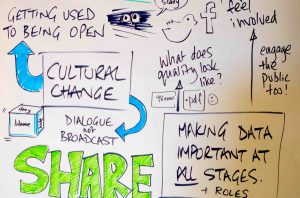 ODI Devon are the local branch (or “Node”) of the Open Data Institute, a global organisation based in London and started in 2012 by Sir Nigel Shadbolt and Sir Tim Berners-Lee. Our mission is basically twofold: to increase the quantity and quality of open data released by organisations in Devon, and to help everyone – from individuals to organisations – to use, combine, re-use, and re-publish the data for public benefit.

If you aren’t following the movement closely, it might surprise you to know that the UK public sector has now published over 40,000 datasets (and that’s just the ones catalogued on the central open data portal for the UK, data.gov.uk). This data is used for many different purposes, for example:
– better regulation of peer-to-peer lending in the UK
– Analysing the effects of a decision to close some London fire stations
– Developing apps that help people get around the capital
– Use of LIDAR datasets for Town planning, flood risk analysis, archaeology and game world generation.

The Devon Node of the ODI has been going since 2014 and is a collaboration between the public and private sectors: it has spawned a number of different side projects such as ThingsCamp (a semi-regular gathering for people who want to learn about the Internet of Things) and The Data Place (a Plymouth-based social enterprise dedicated to building low-cost accessible data infrastructure). Mainly though, the Node is here to support different open data initiatives in the region and we regularly attend local Meetups and support initiatives like DataPlay – Plymouth City Council’s open data engagement programme.

When our hugely successful local Libraries social enterprise approached us to collaborate on maximising their social impact, we obviously jumped at the chance. In a way, Libraries are the original open data organisations: everything they do is dedicated to opening up knowledge for everyone and Devon is very lucky to be home to Libraries Unlimited – one of the most forward-thinking library services operating in the world today.

We saw an opportunity to work with an organisation that had a proper county-wide footprint and was engaging regularly with the public: these things are important if segments of the county aren’t going to be left behind.

At the same time, we are realising that the impact of public services is something that is poorly understood in many fields. As public sector budgets get ever tighter, we realise that it is increasingly important to know what is making a difference in communities so spending can be better targeted. We think (unsurprisingly) that open data holds part of the solution to this situation, because calculating impact is not helpful unless it can be done in the open.

We are engaging with this project in two phases: discovery and design. Earlier this year we ran a discovery workshop at Exeter library where people involved or interested in the library service carried out a giant “brain dump” of all the data that the service creates or impacts on. You can see some of the results of that exercise here.

We’re now collecting some of that data together in preparation for a prototyping event in early 2018, where people will get the chance to imagine some of the things we might do with that data and make prototypes in a variety of ways.

Alongside all of this we are working with the libraries service to create a data portal that shows all the data relevant to the social and economic impact of the libraries in Devon: a full release of this will coincide with the completion of the rollout of a new stock management system by the Libraries Unlimited service.